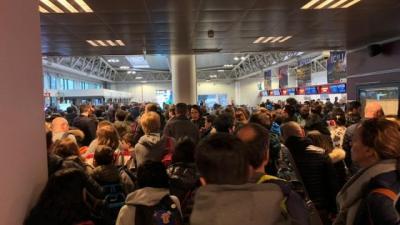 ROME – Tuesday morning at around 8.00 a.m., a fire triggered the evacuation and closure of the city’s Ciampino airport.

Firefighters intervened immediately, while Aeroporti di Roma (ADR), which manages the airport, explained that “due to the presence of smoke coming from a cavity in the basement below the Schengen area, the Ciampino terminal was evacuated as a precautionary measure.”

“Neither passengers nor airport infrastructure were affected,” the company added.

Later in the morning, the suspension of flights was lifted and the arrivals area resumed its activity. The departures area, affected by the smoke, remains closed.