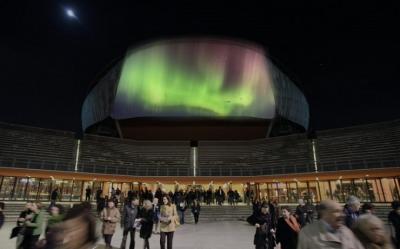 ROME - Equilibrio Festival 2019, entitled Northern Lights in Rome, Aurora Borealis, (Revontuli in Finnish) dedicated to north-European countries (Denmark, Finland, Iceland, Norway and Sweden) is the crowning event of a three-year project celebrating European contemporary dance and ballet. Following the previous editions dedicated to France and Germany, Fondazione Musica per Roma has put together an ambitious and multifaceted programme that is staged in the welcoming spaces of Auditorium Parco della Musica: a large-scale experimental project with a varied and wide-ranging line-up that besides dance – the festival’s key discipline – which also give space to other aspects gravitating around this popular and unique art, different from all other global visual and performing arts.

The evocative theme of Northern Lights was chosen to draw the interest of the Rome-based public towards the always fascinating and stimulating northern European cultural scene. In 1859, Rome witnessed the extraordinary spectacle of a real aurora borealis. Today, in 2019, that unique “light dance” is embodied by the works of a selected group of diverse choreographers, dancers, plastic artists and composers presenting the best of their production. Rome’s dance scene welcomes a wide selection of performances of the highest artistic and aesthetic value. The subjects addressed during this year’s edition include “The Seed Bank” and its future, the memorable adventures of various Italian artists in Scandinavian countries, the history of the Sámi people, and the new talented choreographers emerging on the world dance scene; live performances are accompanied by an exceptional series of projections of the latest dance films.

But Equilibrio Festival 2019 also opens a window on Finnish Lapland. The aurora borealis is projected live on the dome of the Sinopoli hall during the festival. The aurora borealis is the dance of light, a natural phenomenon that colors the night sky of different shades of green, red and blue. These polar aurora born when the charged particles of solar origin hit the terrestrial ionosphere. The interaction is stronger around the magnetic poles of the Earth, which is why the aurora are visible in these areas: in the northern hemisphere they are called aurora borealis and in the southern one, aurora australis. When it's dark and the sky is clear, you can see it with the naked eye - if you're lucky. Live streaming comes live from Lapland, from the observatory of Sodankylä Geophysics, of the University of Oulu, which makes researches about aurora borealis and is realized by Pukki Visuals, a Finnish creative company, specialized in the innovative production of images. In Finland, Pukki Visuals has made live streamings very popular on endangered species that allow you to observe the life of animals in their natural habitats through a camera.

In case of reduced visibility, the images of the Aurora Borealis by the Finnish naturalist photographer Sampsa Sulonen are projected.

Northern Lights in Romeunderlines the importance of contemporary dance as a form of communication and fraternization, two essential elements for our modern world and the construction of a better future. The Auditorium Parco della Musica is hosting this great celebration until Feb. 26, encapsulating and expressing a cultural and humanistic message of the highest importance.

This edition is in collaboration with the embassies of Denmark, Finland, Iceland, Norway and Sweden and with the National Dance Academy as well as numerous Italian and Nordic sponsors. Finnish Ambassador in Italy, Janne Taalas, was representing Finland at the opening event.