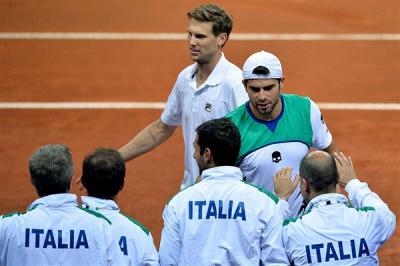 ROME – The Italian Davis Cup team have been drawn alongside USA and Canada in group F of the tournament’s Finals in November.

Andreas Seppi, Marco Berrettini and Simone Bolelli ensured Italy’s qualification for the new-look format with a comfortable 3-1 victory over India at the beginning of February.

In a big change from previous years, the entire tournament will be played over just one week in November, with the six group winners and the two best runners-up qualifying for the knockout stages.

Italy have only won the Davis Cup once, back in 1976, and have finished runners-up on six occasions, but haven’t mounted a serious challenge for a number of years.