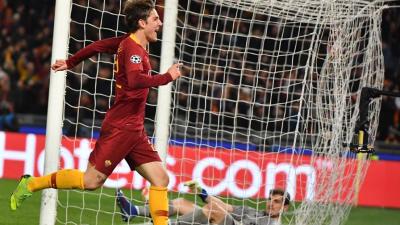 ROME – 19-year-old Nicolo Zaniolo scored a brace to give AS Roma a 2-1 first-leg lead against Porto in their Champions League last-16 fixture.

The teenager hit two goals in six minutes at the Stadio Olimpico, becoming the youngest Italian to score two goals in a Champions League tie. Porto then grabbed an away goal to set up an intriguing second-leg.

After a tense, goalless 70 minutes, Zaniolo opened the scoring with a cool finish, controlling an Edin Dzeko pass and firing low into the bottom corner past goalkeeper Iker Casillas.

Dzeko was again involved in the build-up to the second goal. The striker hit the post from 20 yards out as Roma found some space in Porto’s half, leaving an open net for Zainolo double his tally.

Porto hit back just three minutes later, though, with an all-important away goal. A lucky miscue landed at the feet of Adrian Lopez, who fired past Antonio Mirante.

Lopez’s strike means that a 1-0 win for Porto in the second-leg, taking place on March 6, will guarantee their qualification.

“We felt like a team,” Roma manager Eusebio di Francesco said after the game, confident that his side can defend this result in Portugal in three weeks’ time.