Wales prove too much for spirited Azzurri 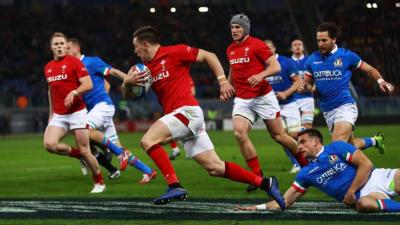 ROME – Italy and Wales shared two tries apiece at the Stadio Olimpico, but fly-half Dan Biggar’s kicking made all the difference as the visitors ran out 26-15 victors.

A much-improved Italian side proved competitive opponents for much of the 80 minutes, while Warren Gatland’s 10 changes from the team that beat France seemed to disrupt Wales’ rhythm.

Biggar kicked a penalty after 62 seconds, a terrible start for the Azzurri, and added nine more points without reply as Wales dominated possession and territory, capitalising on Italy’s weak scrum.

Yet the hosts refused to buckle and started to threaten Wales’ defence. Captain Sergio Parisse turned down a simple three points in favour of an attacking line-out, from which flanker Braam Steyn scored the first try of the game.

Tommaso Allan converted to bring the gap to just five points and should have reduced it further with a simple penalty opportunity just before half-time, only to see his kick strike the frame of the upright.

Allan atoned for his error five minutes into the second period, drawing Italy to within just two points, but Wales’ quality eventually emerged. Full-back Liam Williams cut through the Azzurri defence with a lovely run, setting up Josh Adams to cross over.

The Welsh then put the game out of reach with a second try, as replacement fly-half Gareth Anscombe put a clever chip over the top of Italy’s defensive line, which Owen Watkin pounced on.

But credit to Italy, they kept pushing for a score, cheered on by the home crowd. Before long, Edoardo Padovani was handed the ball with a lot of space on the wing, and made the most of the opportunity, offering his side a glimmer of hope. Allan missed the subsequent conversion however, and the gap stayed at 11 points.

A forward pass in the build up to Wales’ final attack deprived debutant Thomas Young of a score and summed up a below-par performance from Gatland’s side, who looked lacking in ideas for much of the game.

The win did equal Wales’ record run of consecutive victories, 11, which was set in 1910.

Meanwhile Italy's run of Six Nations fixtures without a victory extended to 19 matches.