Pope Francis in the Arabian Peninsula 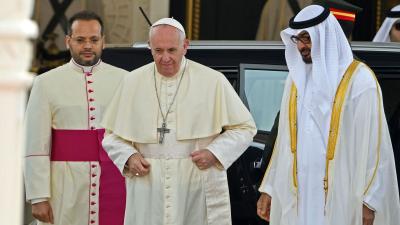 ROME - Throughout the course of history, religion has often been used to mark divisions and incite violent actions. This is especially true in the Middle East and North Africa (MENA); a region that has witnessed, for years, the spread of sectarianism and the rise of jihadi violence. However, the Arab Gulf is now moving forward to overcome religious extremism.

If 1979 marked the year in which the region witnessed the rise of religious radicalism, the February 2019 visit, by Pope Francis, to Abu Dhabi, United Arab Emirates (UAE) marks the historic first visit of the head of the Catholic Church in the Arabian Peninsula, the heartland of Sunni Islam. More than 130,000 people from across the UAE’s large Catholic community attended the mass celebrated by the Pope on Feb. 5 in Abu Dhabi. The Pope’s visit and the Global Conference of Human Fraternity, taking place at the same time in the UAE capital, are arguably the result of a long time effort to roll-back the spread of intolerance and religious extremism worldwide. The Pontiff’s UAE visit is certainly part of a new approach, by the Holy See, which focuses on reaching out to Catholic communities in all parts of the world. However, the visit would have not been possible without a strong commitment, by the UAE leadership.

The founders of the UAE crafted a constitution based upon tolerance and the protection of the rights of religious minorities,  in a region known for severely restricting religious freedom. And, for more than two decades, the UAE has been at the forefront of the fight against all forms of religious extremism and the use of religion for political purposes. As recently as November 2018, the UAE organised and hosted a summit, held in Dubai, which involved more than 15 international and local universities and focused on the crucial role of women and the youth in spreading tolerance.

It could be argued that Gulf momentum behind the focus on religious tolerance was generated by the 2017 Manama Declaration, issued by Bahrain’s King Hamad bin Isa Al-Khalifa, in which Bahrain’s leader called for pluralism, the unequivocal rejection of compelled religious observance, and strongly condemned acts of violence, abuse and incitement in the name of religion. Bahrain’s efforts have been acknowledged worldwide and especially in Europe. In November 2018, La Sapienza University in Rome, Italy, inaugurated the King Hamad Chair for Inter-religious Dialogue and Peaceful Co-existence. That aims to involve a new generation in Europe and the Gulf towards a greater understanding of the relations between cultures and religions, as an antidote to extremism and radicalism.

Achievements in the Gulf, and beyond, are also consistent with the Marrakesh Declaration. In 2016, Morocco’s King Mohammed VI, organised a conference, attended by more than 250 Muslim religious leaders, heads of state, and scholars, in response to the persecution of religious minorities, such as Christians, Jews and Yazidis, by Jihadi groups. The declaration calls on Muslim educational institutions and authorities worldwide to conduct a courageous review of educational curricula in order to address effectively any material that instigates aggression and extremism or leads to war.

The Pope’s Abu Dhabi visit can be therefore considered as clear acknowledgment of the various efforts undertaken by Arab leaders to roll-back extremism and isolate radical voices in their respective countries and in the wider region. At the end of the Pontiff’s visit, Pope Francis,  Ahmed El-Tayeb, the Grand Imam of Egypt's Al-Azhar, and the UAE’s Crown Prince signed a joint statement on human fraternity, committing to more unified world, free from the scourge of terrorism, and reminding that authentic teachings of religions invite us to remain rooted in the values of peace.