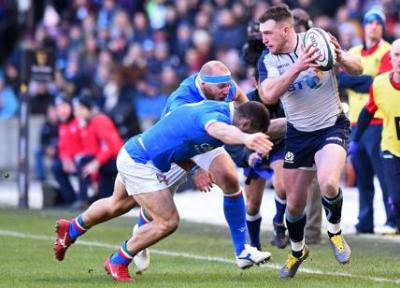 ROME – Scotland’s Blair Kinghorn scored a hattrick as a toothless Italian side were beaten comfortably on the opening weekend of the 2019 Six Nations.

The gulf in class between the two sides was somewhat masked by the 33-20 scoreline, as Scotland’s sloppiness in the final minutes of the game allowed Italy to score three consolation tries.

Tommaso Allan gave the visitors the lead at Murrayfield, but Kinghorn quickly followed up with two first-half tries. Scotland’s nine-point advantage going into half-time should really have been doubled, as the hosts wasted a number of clear overlap opportunities.

Italy’s attack remained non-existent in the second half, nor did their defence put up much of a fight against Scotland’s backline. Fullback Stuart Hogg latched onto Finn Russell’s grubber to extend the hosts’ lead, before Kinghorn completed his hattrick in style, weaving past Italy’s scattered defensive line.

At 33-3 up, with a bonus point secured, Scotland’s implosion was certainly not on the cards. However, a sin-bin for prop Simon Berghan left them with 14 men for the last ten minutes. Italy capitalised on the man advantage, running in three rather undeserved tries as the Scottish defence descended into chaos.

Scoring 20 points is one of the few positives Italy can take from a very mediocre display, and if their defence doesn’t undergo a transformation before Saturday’s clash with Wales at the Stadio Olimpico, a thrashing may well be on the cards.