Guaidó appeals to Italy to support change in Venezuela 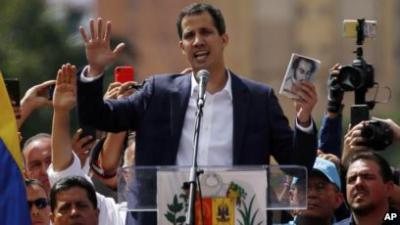 Juan Guaidó declared himself as interim president of Venezuela

CARACAS - Juan Guaidó, president of the Venezuelan National Assembly and self-proclaimed head of government appealed to Italy to support Venezuelans seeking change in their country. “We invite Italy to do the right thing because the days here are counted by lives that are lost,” he said.

Guaidó underlined the importance ofgaining recognition as head of government from the European Parliament, stating that “90% of Venezuelans are looking for change as Nicolás Maduro has lost control of the country.70 people have been murdered in a week by special police forces, and 700 people have been imprisoned, including 80 minors.”

Italian Undersecretary for Foreign Affairs Manlio Di Stefano said Thursday that Italy did not recognise Juan Guaidò as interim president of Venezuela in his clash with President Nicolas Maduro.“Italy does not recognise Guaidò because we are entirely against the fact that a country can determine the internal politics of another country. It is called principle of non-interference and is recognised by the United States,” he said.

Deputy Prime Minister Luigi Di Maio also spoke of the Venezuelan situation and confirmed Italy’s unwillingness to interfere. “Since we have already been burned by interference in other states, we do not want to get to the point of giving recognition to individuals who have not been voted for,” he said.

Guaidó has announced his wish to challenge a prohibition imposed by President Nicolàs Maduro by organising the sending of humanitarian aid, especially medicine, from abroad. However, Di Maio expressed the Five Star Movement’s (M5S) reluctance to become involved in the situation, declaring that “Venezuelans decide this change, we are for peace and democracy.”