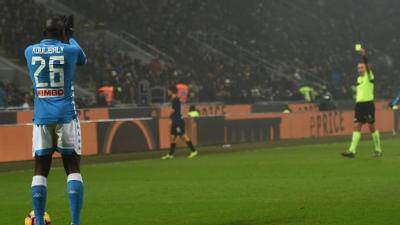 ROME – The Italian Football Federation (FIGC) has announced a revision of the protocols for instances of racist chanting at matches, Il Fatto Quotidiano reports.

The number of warnings before the teams are brought off the field by the referee has been reduced from three to two, in a bid to even more strongly discourage fans from chanting racial abuse at players.

The new protocols dictate that after the first instance of racist chanting reported to the referee, the game will be paused, and players brought into the centre circle. The teams will then be led off the field if any other racial abuse takes place.

The issue has recently flared up again in Italian football after Napoli defender Kalidou Koulibaly was subjected to racist chants by Inter Milan fans on Boxing Day. The Senegalese international was sent off during the game, which his manager Carlo Ancelotti put down to his mindset being greatly affected by the abuse.

In the aftermath of the match, Ancelotti insisted that his Napoli side “will stop the match” the next time a player is racially abused.

His lack of support for FIGC is not, unfortunately, without consequence. The referee has the power to take players from the field, but the final word on whether the match will be suspended falls to the person in charge of public order, a position designated by the Interior Ministry, which Salvini heads up.