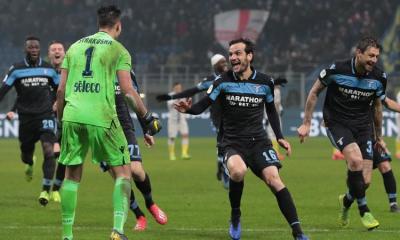 ROME – Inter Milan crashed out of the Coppa Italia at the quarter final stage after being beaten 4-3 on penalties by Lazio.

Lucas Leiva sent Lazio into the semi finals with his winning penalty, after Inter midfielder Radja Nainggolan had seen his effort saved by Thomas Strakosha.

Neither side found the net in the opening 90 minutes, thanks to some excellent saves by both keepers. Lazio striker Ciro Immobile opened the scoring after 108 minutes, but Mauro Icardi's 125th-minute spot-kick took the game to penalties.

Lazio will now face AC Milan, who beat Napoli 2-0 on Tuesday, in a two-leg semi-final.

In the other half of the draw, holders Juve, searching for their fifth Coppa on the bounce, were stunned by Atalanta on Wednesday night, as manager Maxi Allegri was sent off for continually remonstrating with the officials.

Despite fielding a strong side, with both Cristiano Ronaldo and Paolo Dybala starting up-front, Juve were left flat-footed as Atalanta started brightly. Their quality was rewarded with two goals in three minutes at the end of the first half.

Duvan Zapata, equal with Ronaldo in the Serie A scoring charts, made it 2-0 after Timothy Castagne’s opener, before closing out the game with a second in the 86th minute.

At Fiorentina, Roma endured an evening to forget, conceding seven goals for only the sixth time in the club’s history. Two early goals from Federico Chiesa got the home side off to a perfect start, going into the half-time break 3-1 up.

Substitute Edin Dzeko was sent off after Fiorentina’s fourth goal, opening the door for a thrashing. Chiesa completed his hattrick in the 74th minute and Giovanni Simeone added a brace to make the score 7-1.