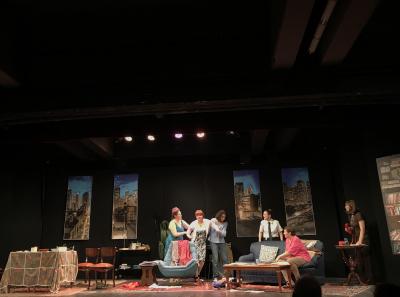 ROME – An exuberant and energetic performance of Neil Simon’s adaptation of his hit comedy The Odd Couple, Female Version assertively parodied social stereotypes to ensure that the audience was kept laughing throughout. This light-hearted play was presented by The Rome Savoyards and Plays in Rome at Teatro San Genesio.

The production makes comedic the difficultly of coming to terms with the termination of marriage. By approaching the subject of divorce, a common hardship faced by many, the work’s underlying ideas are easily relatable and identifiable.

Not only does the work address the universal theme of relationships with regards to marriage, but also the notion of how easily friendships can be tested. It is this contemporary message that makes the work timeless and applicable to a wide audience.

The play follows the relationship between two friends who come to realise the difficulties and frustrations of living with one another. From the outset, duo’s entirely contrasting personalities quickly come to light, causing humorous chaos and consistently retaining the audience’s attention.

In this adapted female version, directed by Sandra Provost, Simon reimagines Oscar Madison and Felix Unger as independent women living in New York during the 1980’s. The lead characters are transformed into Olive Madison and Florence Unger. All of the play’s events take place in the Olive’s apartment over a three-week period.

Instead of the poker party that begins the original version, Ms. Madison has invited the girls over for their weekly game night of Trivial Pursuit. They are all enjoying the evening in Olive’s disorganised apartment when Florence arrives after her husband has just left her.

Fearful that Florence, played by Shelagh Stuchbery, could be suicidal, Olive, played by Gabriella Spadaro invites her to move in with her. However, the striking differences between the two characters are soon illuminated.

Stuchbery and Spadaro thrive off one another to embrace the duo’s dry sense of humour and witty exchanges that fuel the sense of comedy, ensuring that the momentum of the story never wavers.

While Florence is fanatically clean and hygiene-obsessed, Olive is messy and carefree about the state of her apartment. Much of the play’s comedy stems from these two polar opposite characters who antagonise one another and continuously clash throughout.

The minimal props, simple staging and single setting used in the production propels the characterisation of Olive and Florence into full focus. Their strong and dynamic stage presence is particularly pertinent when they come head to head during a lively double-date with their Spanish neighbours, causing sparks to fly.

The Odd Couple first premiered on Broadway in 1965. The timeless story was a great success and ran for over 960 performances.

Next showing at Teatro San Genesio, Via Podgora 1: