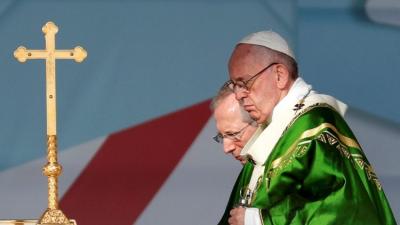 Pope Francis at the final mass of World Youth Day

VATICAN CITY - Pope Francis has returned to Italy after the World Youth Day (WYD) Thursday in Panama where he addressed 700,000 people, urging the need to put a stop to using social media to “foment hatred and prejudice.”

“Dear young people, you are not the future, but the now of God”, said the Pope as he was welcomed by an enthusiastic applause. Francis took the opportunity of WYD to talk to young people about the language of social media.

“If the Internet represents an extraordinary possibility of access to knowledge,” said the pontiff, “it is true that it has also revealed itself to be one of the places most exposed to disinformation and conscious and targeted distortion of facts and interpersonal relations.”

He therefore encouraged a halt to the use of social media because it "too often gives space to suspicion and the venting of all types of prejudice: ethnic, sexual, religious and others.” “It is not enough to stay connected all day to feel recognised and loved,” he added.

At the final Mass, the pope expressed the need to live in the present. "We must strive to promote channels and spaces in which we can engage in dreaming and build tomorrow as early as today, but not in isolation, united, creating a common space,” he said.

Before flying from Panama to Rome, the Pope visited a centre that welcomes young people suffering with AIDS, he then met the 20,000 volunteers who made the event of WYD possible.

In the presence of the pontiff, Cardinal Kevin Farrell announced that the next WYD will be held in 2022 in Lisbon, Portugal.