Ban on all ships a half-mile around Sea Watch 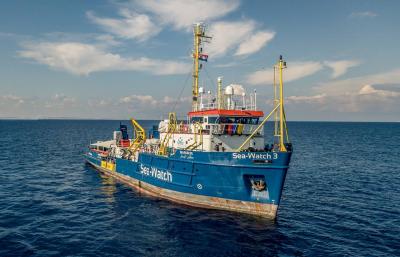 Sea Watch 3 is anchored with 47 migrants aboard

SIRACUSA – Port Authorities have banned any unauthorised vessel from “navigating, anchoring, or stopping” in the Bay of Santa Panagia, a half-mile from where Sea Watch 3, a ship owned by the NGO Sea Watch, is anchored with 47 rescued asylum seekers aboard.

The ordinance specified that navigation by other vessels around Sea Watch 3 could “create problems regarding public order and public health.”

Pressure on the Italian government to allow teenagers, among the 47 on board, to disembark the ship in Italy is mounting. This comes after Nicola Fratoianni, national secretary of the Italian Left party, as well as two other opposition MPs and the mayor of Siracusa carried out a visit by dinghy to Sea Watch 3 on Sunday to highlight the plight of those on board.

Interior Minister, Matteo Salvini, criticised their decision to board the ship, stating that they violated the law as “they have not respected health and hygiene regulations.”

On Sunday, Salvini also expressed that he will not change his mind regarding the closure of Italian ports to migrant-rescue vessels. In fact, he voiced his intention to close Italy’s largest refugee centre, stating “By the end of the year, it is my intention to close Cara di Mineo, the bigger the centres, the easier it is for the criminals to infiltrate.”

There continues to be much debate surrounding the fate of the migrants aboard Sea Watch 3. Leading member of the Five Star Movement (M5S), Alessandro Di Battista, has stated that he is in favour of landing the migrants and then flying them to Holland.