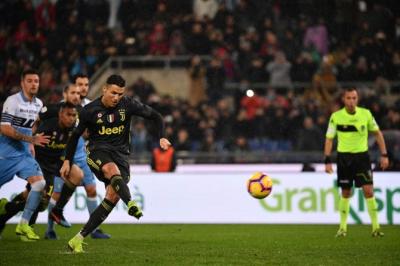 ROME – An 88th minute winner from Cristiano Ronaldo completed an impressive Juventus comeback at the Stadio Olimpico, increasing their advantage at the top of the Serie A to 11 points.

Despite being outplayed by Lazio for much of Sunday’s game, Juve showed their title-winning quality by recovering from 1-0 down to extend their unbeaten run with two goals in the last fifteen minutes.

An Emre Can own goal after an hour gave Lazio a richly deserved lead, but Maxi Allegri’s substitutions made all the difference. Four minutes after coming on, Cavaco Cancelo equalised from close range, before Ronaldo scored his 17th of the season a few minutes from time.

Second-placed Napoli had been held to a 0-0 draw by AC Milan on Saturday, opening the door for Juve to consolidate their advantage at the top of the table.

Fabian Ruiz Pena also saw red late in injury-time, capping off a disappointing evening for Napoli, who must now hope that Juventus endure a serious downturn in form to have any chance of challenging for the title.

Inter Milan also struggled at the weekend, losing 1-0 to Torino and losing Matteo Politano to a late red card in the process. The Milan side now sit eight points behind Napoli and five clear of local rivals AC Milan.

AS Roma were stunned by Atalanta’s incredible second-half comeback, letting an almost certain victory slip through their fingers. Two Edin Dzeko goals and an El Shaarawy strike gave Roma a 3-0 lead after 40 minutes, yet Atalanta managed to claw the game back, netting an equaliser after 71 minutes.