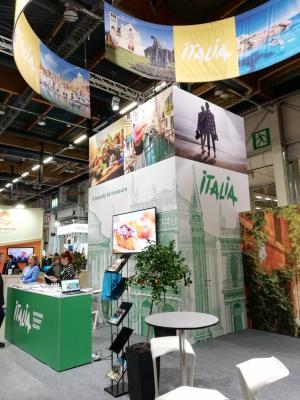 HELSINKI - The 33rd edition of the International Tourism Fair, MATKA, the leading one in Scandinavia, took place recently in Helsinki, Finland. The total number of visitors amounted to approx. 61,000 (14,000 of them professionals) and 1,000 exhibitors. Among the 80 countries represented, this year the Italian pavilion had a visible presence and performed well. Arranged by the Enit (Italian Tourism Board) of Stockholm with the support of the Embassy of Italy, the pavilion acted as an institutional representation of the best of Italy. Alongside it, other Italian spots and agencies had their own stand. The Italian Ambassador to Finland, Gabriele Altana, was a host at the pavilion.

The commitment of the Municipality of Como to promoting its territory on the Scandinavian market through sport and the Lake was noteworthy. Elsewhere, the stand of the Finnish airline, Finnair, introduced its new destination in Italy, Bologna. As always the Lapps themes were original in the stand of Inari and Rovaniemi, the home of the real Santa Claus.

The fair gave an impressive start of the travel year and a unique opportunity to get acquainted with Finland and the whole world under one roof: The Finnish travel industry has bloomed in the past few years with strong players focusing on quality, efficiency and innovation to offer the best experience to both business and leisure travelers. This year Matka especially gave the stage to smart and sustainable travel solutions as well as hidden treasures highlighting new interesting destination.

During a media tour arranged by BusinessFinland, international media representatives had the chance to know and visit hotels and meeting places of fresh opening, like the St. George hotel and Lapland Hotel in Helsinki, the already famous Oodi Central Library of the city and urban city culture examples.

Minister of Transport and Communications Anne Berner, who made the official remarks at the opening ceremony, remembered that tourism cluster employs over 100,000 people in Finland, and last summer the amount of Finns’ holiday trips abroad amounted to up 3,2 million, 1,5 million of those were done by plane and 1,2 million by ship. Berner noted that Lapland is visited every year from people coming from some 140 countries, which makes that region a very international travel destination. The Minister stressed that “sustainability is no longer just something we must do but it is turning into a competitive advantage. Cutting down carbon dioxide emissions creates growing opportunities in many sectors, including travel and transport”.

Finnish plan to travel mostly within the country and to nearby European destinations in 2019, according to a poll commissioned by Matka. Nearly all respondents said they plan some domestic travel in 2019. Most also plan foreign trips, particularly to European city destinations and the nearby Baltic states. Beach and ski destinations abroad remain popular, as do Baltic Sea cruises. Last year Italians’ overnights in Finnish establishments increased of ca. 4% compared with previous year.

Matka is organized by Messukeskus Expo & Convention centre, which is Finland’s largest and most versatile venue, celebrating its centennial this year. It holds annually over 100 trade and consumer shows as well as over 2,000 meetings and congresses. In 2017, it attracted a total of 1,200,000 visitors to the whole of the events organizes

Number of exhibitors 915 from 83 countries.

Italy had 2 suppliers and 11 buyers.