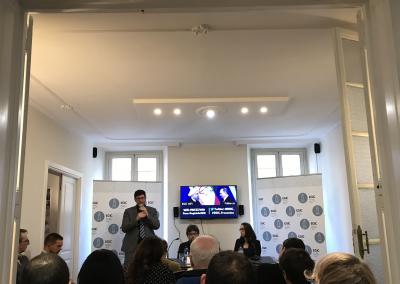 ROME – The complex relations between Russia and Iran within the framework of the turbulent and rapidly changing environment of the Middle East were presented by Gumer Isaev, from the St. Petersburg Centre for the Contemporary Middle East Studies at the headquarters of the Euro-Gulf Information Centre (EGIC) as part of the organisation’s newest lecture series.

During the lecture Isaev clarified how throughout many difficult periods in history Russia and Iran have shared common interests, most notably their interest in the fate of the Assad regime in Syria. “Now in the most interesting period for Syria, its way to peace, the interests of the countries are becoming different,” he said.

“Now that the military conflict in Syria is more stable than it was a year ago, I think we will see the hidden struggle between Iran and Russia in terms of their competition for influence in Syria,” declared Isaev. The shifting and diverging interests of Russia and Iran beneath the surface of their relationship was a predominant focus of the lecture.

Dr. Mitchell Belfer, the President of EGIC, opened the event by expressing the need to examine the dynamics of Europe’s relationship with the Middle East, in particular the “brave topic” of “the under discussed issue of the Iran and Russia relationship.”

Isaev then went on to explain the multifaceted relationship between Russia and Iran within a historical context. “We will focus on recent years and the situation in the Middle East and Syria and how Russia and Iran’s behaviour in the civil war in Syria was a big challenge for both countries,” said Isaev.

After addressing key historic elements of Russia and Iran’s relationship including Russia’s occupation of Iran during World War II and how the 1979 Islamic revolution gave rise to an anti-Soviet regime in Iran, Isaev explained how Russia’s mass sale of weapons to Iran in the 1990's meant that “the Iranian government recognised Russia as a partner.”

He then commented on the complicated conflict of the Syrian civil war which has been ongoing since 2011. “Both Russia and Iran had strong ties to Syria and wanted to support the Assad regime and fight against ISIS,” said Isaev.

For Iran, Syria was an important country as it was a route to expanding Iran’s influence and mobility in the Middle East. “Iran supported Syria by sending troops as well as many Iranian advisors to take part in the Syrian conflict,” declared Isaev. “In 2012 Iran opened a credit line to support the Syrian government and Syrian armies,” he added.

With regards to Russia’s relationship with Iran, Isaev highlighted that “Since the Arab Spring, Russian politics have certainly changed as a product of mass protest. Before this time, relations between Russia and Syria were at a low level.”

He pointed out that when the conflict in Syria started, “Public opinion feared the dissemination of troops into conflicts in the Middle East. Russia supported the Assad regime fighting against terrorists but was not ready to send troops to support it,” he said.

Russia only began sending troops to protect Syria in 2015. “By showing the world that it was fighting ISIS, Russia aimed to prevent a terrorist threat from coming to Russia,” as well as gaining good reputation in the Western world, explained Isaev.

According to Isaev, Arab sources wrote that the decision for Russia’s involvement in Syria was taken due to Iran’s influence. “The Assad regime was already close to defeat in 2015 and Iranians could not change the situation because of their lack of air forces, Russia therefore pragmatically intervened to protect Assad,” he said.

“Despite both assisting with the challenges in Syria, Iran and Russia have different goals. For Iran, it was a strategic link with Iraq and Lebanon and a way to increase its influence in the Middle East, however Russia’s approach was more pragmatic,” said Isaev.

Isaev then posited the question, “Are Russia and Iran friends or frenemies?” Although they appear to be allies in terms of their short-term goals, “Russian officials never call Iran an ally, they are very neutral and say that they are ‘partners’,” said Isaev.

He summarised the relationship between Russia and Iran as being a bilateral relationship based on interests. When they have common practical interests, there is a deep cooperation between the countries, yet while Iran has “a long-term strategic interest in Syria in terms of increasing its presence in the Middle east, Russia’s interest is more of a short-term means of self-protection.”

Isaev finished by commenting on the consequent fragility of Russia and Iran’s present relationship. “Iran now has more leverage in the Syrian regime than Russia, there are some elite ministers in Syria that are deeply connected with Iran,” he said. Iran therefore influences the politics and economics of Syria.

“For Russia, Iran was a partner for that period but now the situation could change. The lifting of any sanctions in Iran will not be good for Russia as Iran would prefer to buy from Europe. Russia is afraid and is trying to maintain its position in the Middle East to protect itself from dangerous changes,” Isaev concluded.