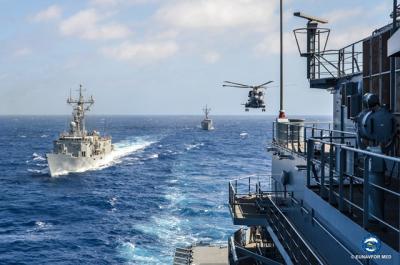 Germany will no longer send ships to support Mission Sofia

BERLIN – The Italian government's "hard line" on accepting migrants into Italian ports has provoked Germany to temporarily abandon Mission Sofia, the operation that Europe launched in June 2015 with the aim of fighting migrant traffickers and rescuing shipwrecked people in the Mediterranean Sea.

According to the German Press Agency (DPA), Italy's reluctance to allow migrants to disembark at its ports has been viewed as a form of sabotage to the mission as it means that the original goals of the operation have not been met in recent months.

The European Union extended the mandate of Mission Sofia by three months at the end of Dec. 2018, with the operation now set to expire at the end of March. However, the Bundeswehr will soon no longer send any ships to support the mission.

At the end of last August during the summit of the European defence ministers in Vienna, Italian Minister of Defence Elisabetta Trenta had proposed a modification of the rules of engagement of the mission. She called for a rotation of the ports of disembarkation but her proposal was rejected by many countries.

The Interior Minister Matteo Salvino expressed that “As a mandate the Sophia mission had to make all immigrants disembark only in Italy and so did, with 50,000 arrivals in our country. If someone wants to withdraw from it, it is not a problem for us.”

As explained by Der Spiegel, there is above all a will to put pressure on the EU to find a solution to give a new drive to the operation. “Sending the Berlin ship for the Sophia mission is only temporarily suspended. The mandate of the mission will be extended by the EU in March and we believe that the tasks of the mission must be better clarified”, said a spokesman for the German Defense Ministry.

The spokesman confirmed that “if the suspension decision is revised, the Berlin ship can be in the Mediterranean within 15 days.”“Our men still remain in the headquarters of Sophia,” he added.