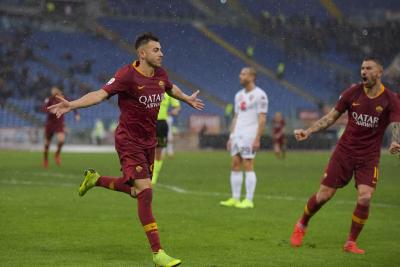 ROME – A quickfire double against Lazio ensured Napoli kept the pressure on Juventus at the top of the table this weekend, while an inspired comeback from Torino wasn’t enough to prevent another win for AS Roma.

Having recovered from a poor opening to the season, Roma secured their fourth win in five matches in the Serie A, recovering well to find a winner against Torino at the Stadio Olimpico after the away side’s second-half revival.

A scrappy opener from Nicolo Zainolo was backed up on 34 minutes by Aleksander Kolarov’s penalty after Stefan El Shaaraway was brought down in the box. The Italian winger, influential in the game, found the home side’s winner with 15 minutes to play after a rejuvenated Torino came out swinging in the second-half and managed to get back on terms.

In Naples, Carlo Ancelotti’s side reduced the gap to Juventus to six points, though the Turin side have a game in hand. Two goals in three first-half minutes were enough to see Napoli past fifth-placed Lazio, though a Ciro Immobile strike on 65 minutes threatened to spark a comeback. A straight red for Francesco Acerbi just five minutes later derailed any hopes Lazio fans had of coming away with a draw, as the away side’s 10-men weren’t able to push for an equaliser.

Third-placed Inter Milan weren’t able to keep pace with Napoli, slipping seven points behind after a 0-0 draw with Sassuolo at the San Siro. In the red side of the city, AC Milan travel to Genoa on Monday without striker Gonzalo Higuain, who has been dropped from the matchday squad after rumours about a possible loan move to Chelsea have developed in recent days.

Juventus face Chievo on Monday night at the Allianz Stadium, giving Cristiano Ronaldo the chance to cement his place at the top of the Serie A goalscoring charts. Both Duvan Zapata and Fabio Quagliarella joined the Portuguese striker on 14 goals after hitting four and two, respectively, at the weekend. Zapata’s Atalanta thrashed relegation dead-certs Frosinone 5-0, while a Quagliarella brace almost stole three points for Samporia, only to be denied by a last-minute equaliser from Fiorentina.

Elsewhere, SPAL, Bologna and Empoli all made slight ground on Udinese in their fight to avoid relegation. SPAL and Bologna played out a 1-1 draw, while Empoli were denied a 2-1 win by a last-gasp Cagliari equaliser. Udinese, now equal on points with SPAL, were beaten 2-1 at home by Parma.