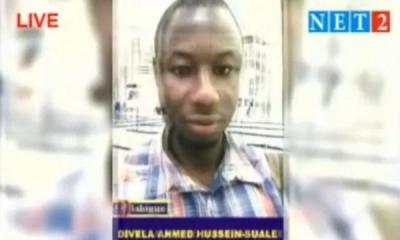 ACCRA – An undercover journalist investigating corruption in Ghana’s football leagues has been killed after a politician publicly called for retribution against him.

Ahmed Hussain-Suale, 34, was shot three times by unidentified motorcyclists as he was driving home, twice in the chest and once in the neck, local media reports.

Undercover reports produced by Hussain-Suale and his colleague Anas Aremeyaw Anas led a lifetime ban for the former head of the Ghanaian football association, as well as the suspension of over 50 referees.

After BBC Africa released a documentary detailing the investigative work of the journalist, Ghanaian MP Kennedy Agyapong called for retribution to be brought onto Hussain-Suale. The MP had previously been urged to cease threatening journalists by the Committee to Protect Journalists.

In the aftermath of the killing, Tiger Eye were quoted as saying they were “terribly devastated by the dastardly act,” but remained “unshaken” in their pursuit of “nation-wreckers.”

“Sad news, but we shall not be silenced. Rest in peace, Ahmed.” Anas tweeted, accompanied by the hashtag “#JournalismIsNotACrime”