Conte stresses need to cooperate with the Sahel 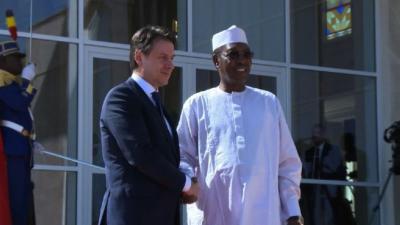 N’DJAMENA - Prime Minister Giuseppe Conte announced Wednesday that Italy is ready to take its military to Chad. “We are evaluating sending armed forces to train local troops,” he said, speaking in the Chadian capital after meeting with President Idriss Deby, Il Messaggero reports.

On the second day of his visit to Niger and Chad, Conte spoke at a conference in N’Djamena. The two days spent in the Sahel have strengthened in Conte the belief that the area, which is on the southern border of Libya, is “strategic” in the fight against human trafficking and terrorism. The prime minister reiterated the appeal he voiced to Europe Tuesday in Niger, saying Wednesday that Europe must “Stop being short-sighted or it will keep harming itself.”

As the first president of the Italian Council to set foot in Niger and in Chad, Conte has collected requests from the leaders of the two countries who are concerned by the Libyan crisis that is creating instability on their borders, and the resurgence of terrorism which has seen the number of attacks in the Sahel triple in a year.

After putting forward the possibility of reinforcing the mission started in Niger in September, Conte said that he is also “exploring the possibility” of doing “capacity building” in Chad. It would be a matter of “training local forces” to fight terrorist and human traffickers “more effectively”. This would form part of a strategy that aims to strengthen the Italian and European presence in the Sahel.

President Idriss Deby, who has been leading Chad since 1990, also warned that instability and “terrorism” in the Sahel are “a threat to the world.” With Conte he has agreed to strengthen cooperation between the two countries.

“I will be an ambassador in Europe because the area receives more attention. And I will not tire of returning to office in view of driving for a renewal of the European institutions,” Conte declared. To begin with, we need to “make the Trust Fund for Africa much more substantial,” the prime minister reiterated.

Conte also expressed his fear that Europe could crumble under the pressure of irregular migration and called for the need to implement a “global” approach as the only solution to the crises in both Europe and the Sahel. After thanking Deby, Conte added that “perhaps we should have come before, since your country is of strategic importance for Italian and EU interests.”