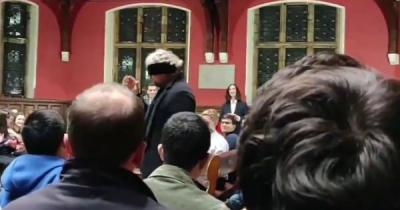 OXFORD – Co-founder of the Five Star Movement Beppe Grillo was booed by attendees as his address at the prestigious Oxford Union came to a close, Il Fatto Quotidiano reports.

Introduced to the audience as an “actor, comedian and political activist,” Grillo entered wearing a blindfold, a metaphor of “what America, Europe, the whole world is becoming,” before claiming that the press is the “real populist danger.”

The Insider reported that Grillo’s team had barred the press from covering the closed event (http://www.italianinsider.it/?q=node/7595), leaving the M5S advocate to speak to a room of students.

Despite being booed, chastised and branded a “fool” over the course of the hour and fifteen-minute event, Grillo insisted in a TV interview with Stasera Italia on Tuesday that he had got on well with Union members, saying, “I think I gave a good impression.”

He also denied making anti-Italian remarks during his address in response to a question about the expulsion of dissidents, and stood up for the M5S-League coalition, after audience members sought to label it an “alliance … with all the ingredients of fascism.” “We signed a 20-point agreement,” Grillo responded. “Our nature is still different from theirs.”