Refugees stuck on the border between Algeria, Niger 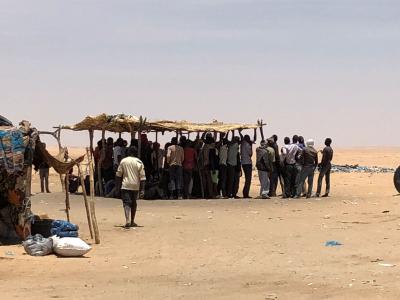 ROME: The UN High Commission for Refugees, the UN refugee relief agency, has raised its concerns over the safety of vulnerable people from Syria, Yemen and Palestine stranded at the southern border of Algeria with Niger. UNHCR was informed of a group of about 120 Syrians, Palestinians and Yemenis who, after a period of detention in the center of Tamanrasset in southern Algeria, were transferred to an area near the Guezzam border crossing on Dec. 26.

Of this group, some people are already known to UNHCR as registered refugees who have fled conflict and persecution or claim to have sought international protection in Algeria. According to the information available to UNHCR, 20 individuals are currently stuck in the desert with no protection from the harsh conditions, three kilometers from the Guezzam border crossing. The other 100 people who were taken to the border are currently missing.

UNHCR is in contact with Algerian authorities on this matter and asked to gain access to the refugees to assess their needs for international protection. A media report was released in Algeria, stating that the people had been transferred to the border in agreement with UNHCR. This information was refuted by the agency, which said: “we wish to make it clear that the Agency has had no involvement.”

Given the urgent humanitarian imperative to provide assistance to those stranded at the border, UNHCR called on the Algerian authorities to gain access to the people on the run, as to provide any humanitarian assistance needed, identify those in need of international protection and guarantee their safety.

Algeria is facing significant challenges in responding to mixed migratory flows. As such, UNHCR maintains regular communication with the authorities regarding the situation of refugees and asylum seekers, who may be subject to arrest and expulsion. Recognizing that Algeria has already welcomed about 50,000 Syrian refugees who have sought security in the country, UNHCR said : ‘‘we ask the authorities to extend this hospitality to those who need it’’.

While border management remains a sovereign prerogative of all governments, UNHCR considers that ‘‘border security and international protection are not mutually exclusive’’. UNHCR emphasizes that ‘‘any person whose life is at risk in their country of origin must be able to access the territory and seek asylum in a safe country, and that each asylum application should be considered individually.’’

Algeria has been involved in other episodes of expulsion of migrants coming from Sub-Saharan Africa to Niger. Last year,the Associated Press reported that Algeria had left more than 13,000 migrants in the desert of Niger and Mali since May 2017, leaving them to wander through hostile terrain in temperatures well above 40 C. Estimates show that Algeria carried out summary expulsions of more than 37000 migrants in the desert border with Niger between 2014 and 2018.

Algeria’s interior ministry confirmed the figure but claimed that the abandoned migrants were displaced to the border by virtue of an agreement with Niger’s authorities. Algeria has an agreement with Niger to deport its citizens by convoy direclty to the city of Agadez whereas migrants from other countries have been rounded up in sweeps and trucked to desert strips on the border. Human rights groups, however, hold Algeria responsible for using bilateral repatriation agreements with Niger to deport all Sub-Saharan nationals in its territories. Last May, dozens of Sub-Saharan migrants have died on the Algeria-Niger borders as Algiers continues summary expulsions, the International Organization for Migration (IOM) said.