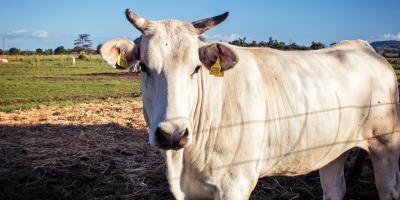 ROME - A giant Australian steer named Knickers recently became an internet star because of his huge bulk, but Italian famers insist their own Chianina oxen are the largest cattle breed in the world.

Standing 1.94 metres tall at the shoulder and weighing 1,400 kilos, Knickers is exceptionally large for his Holstein Friesian breed and his black and white frame was set off to advantage against the small brown Wagyu cattle who were grazing around him in photos that went viral on internet. The Wagyus were six years younger than Knickers and grow to a maximum height of 1.40 metres.

Cattle from the Chianina breed, which takes its name from the Val di Chiana in Tuscany, can look down their noses even at Knickers. Admired by the ancient Romans for their pure white coats, they were used by them in triumphal marches and religious processions and cited in the literature of Virgil and Pliny the Elder.

A representative of the breed was recognised as the world’s tallest cow by the Guinness Book of Records in 2010. Bellino, a bull who measured 2.03 m at the shoulder and weighed 1,700 kilos in his prime, passed on to celestial pastures five years ago.

His owner, Massimo Donin, said his record had not been surpassed since, but he had several animals who could be ready to step into his shoes. “The biggest is Barone, who is about the same height,” Mr Donin said. “I have five large Chianina oxen who participate in agricultural shows and draw carts at religious festivals and marriages.”

Bellino died at the age of 14, after his legs began to fail, Mr Donin said. “They’re heavy beasts. “You don’t want to keep them too fat, or their legs give way.”

Italy’s most recent champion was proclaimed at the agricultural fair of Umbria in April. A Chianina bull named C’è (He’s there), weighing 1640 kilos, was declared the country’s largest and most beautiful ox. C’è has now retired from shows and is doing his bit for the preservation of the breed at a farm near Rieti.

Italy’s farmers’ association was quick to respond to the challenge from Down Under, reasserting the supremacy of the Chianina breed in an official statement. Unfortunately Coldiretti got some of its data in a twist, referring to Knickers as Kickers and naming Moriero, a 1,600 kilo bull, as its champion. Moriero had unfortunately already followed Bellino to the Elysian fields, however.

“Ours is a giant breed, while the Australian steer is an anomaly,” said Giorgio Apostoli, Coldiretti’s chief livestock specialist. “The Chianina is the largest cattle breed in the world. It was once used as a beast of burden and is now very popular at traditional folklore festivals, as well as being a meat machine.”

Four Chianina oxen traditionally draw a ceremonial cart before Siena’s Palio horserace, and a young heffer is awarded as the prize to the winning team in Florence’s brutal calcio storico, the costumed football game that combines elements of rugby, boxing and wrestling and has been popular since the Middle Ages.

It is also a prime source of the bistecca fiorentina, large slabs of T-bone steak cooked rare on a grill. Unlike Knickers, who turned out to be too large for the Australian abattoir, Chianina cattle are slaughtered at between 16 and 18 months, before they turn into giants like Bellino.