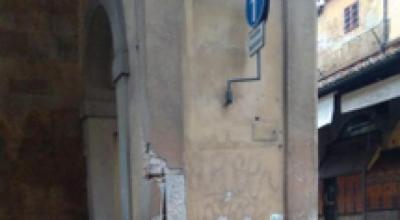 The damaged corner of the Vassari corridor

FLORENCE -- Around 7 a.m. on Thursday a truck driver hit one of the supporting pillars of the Vasari corridor, the passageway which connects the Uffizi museum to Palazzo Pitti, crossing the Arno river. The corridor was designed in the 16th century by architect and art critic Giorgio Vasari and is considered a pearl of Florentine renaissance style architecture.

The driver’s manoeuvre damaged the base of one of the gallery’s pillars, at the intersection of the Lungarno degli Archibusierei with the Ponte Vecchio. After the accident, the driver drove away quickly in the direction of piazza della Signoria. The Uffizi museum immediately activated their security protocol and raised the alarm. Thanks to footage from local CCTV, the municipal police were able to identify the number plate of the truck and the driver, a 50 year-old man from Campania region. The man is due to pay a fine of 378 euros.

Under Italian law, the responsible person is also accountable to pay for the damage to the structure and for restoration to its original state. "The damage is well over ten thousand euros" says Eike Schmidt, director of the Uffizi, whose role includes supervision of the gallery. Mr Schimdt raised a legal complaint against the driver for ‘damage of an architectural good’.

"Due to the shock - Schmidt explained – the base of the pillar broke. From the first inspection, however, it seems that the internal structure of the column has not been damaged. Now we must start by securing the area. " "Of course - continued the director – the person who was driving the vehicle must have noticed what happened." Schmidt concluded that the accident could lead to "reconsider the idea of having a pedestrian area around the Ponte Vecchio. "

‘Having a pedestrian area would have made no difference’ said Stefano Giorgetti, city advisor for mobility, ‘given that the vehicle which damaged the pillar is used for freight transport and as such would be allowed in pedestrian areas. "

The Vasari corridor was commissioned in 1565 by Cosimo de Medici, grand duke of Florence, and designed by architect Vasari, who had already designed the Uffizi gallery. The corridor connects the Palazzo Pitti, then residence of the Medici family, to the town hall, Palazzo Pitti. The gallery was built in just five months to allow the newly wed son of Cosimo, Francesco de Medici, and his wife, Johanna of Austria, to move freely and safely across the city. Starting from Palazzo Vecchio, it goes through the Uffizi, runs along and then across the Arno river on the Ponte Vecchio, goes round the Manelli Tower and the Obriachi (drunken) tower. The gallery then enters the church of Santa Felicita, transforming into an elevated balcony, to end in Palazzo Pitti.

The gallery has been hit by another shock, of a different nature, in 1993, when a car full of explosive blew up near Torre dei Pulci in a mafia-led attack. Five people were killed and many others wounded as well as serioujsly damaging the Uffizi Gallery and the Vasari corridor. In the corridor, some of the precious self-portraits exposed were irremediably damaged.