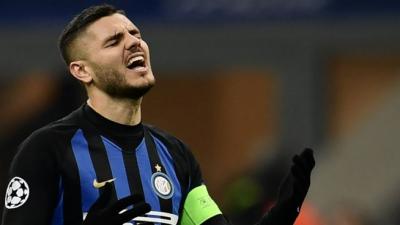 ROME – Both Inter Milan and Napoli endured nights-to-forget as the Serie A high-fliers missed out on qualification for the last 16 of the Champions League, overtaken by Tottenham and Liverpool, respectively.

One of Italian football’s darkest nights in recent European history saw Inter only manage a draw at the San Siro against PSV Eindhoven, while Napoli were utterly outclassed by Liverpool at Anfield.

As disappointing as Inter’s performance was, Mauro Icardi’s 73rd minute equaliser looked to be enough to send Luciano Spalletti’s side into the knockout stage, with Tottenham trailing Barcelona. However, with just five minutes left on the clock, the London side’s attacking persistence was finally rewarded as Lucas Moura drew his side level, relegating Inter to third place in the group. Tottenham, having just taken one point from their first three group games, completed “mission impossible,” according to manager Mauricio Pocchettino, leaving Inter to rue a missed opportunity.

Going into the final round of games, the Milan side had to better Spurs’ result to take second place, which, considering the teams’ respective oppositions, seemed very possible. An early goal from Hirving Lozano for PSV complicated proceedings, however, and Inter struggled to gain a foothold in the match. The second-half display was far more promising, as Spalletti’s substitutions brought some attacking impetus to the team, and Icardi’s header with just under twenty minutes to play seemed to have secured qualification, only for Spurs to deny them at the last second.

The desperate night for Italian teams continued as Napoli were completely dominated by an impressive Liverpool side. The 1-0 score-line did not give the slightest reflection of the contest, as the Premier League leaders missed golden chance after golden chance to put the game to bed. Leading the group ahead of the match, a draw or win for Napoli would have seen them through, as would a loss by a single-goal margin, provided they scored. However, Carlo Ancelotti’s side were barely given a sniff at goal as Liverpool controlled the tempo of the game, opening up the Napoli defence with apparent ease.

A first-half goal from Mohammed Salah was just reward for the countless chances created by the deadly front three of Salah, Roberto Firmino and Sadio Mane. Napoli ‘keeper David Ospina pulled of a series of tricky saves to deny Salah and Mane, giving his side a fighting chance of qualification. A rare opportunity for Napoli in injury time could well have resulted in a crucial goal, were it not for the incredible intervention of former Roma ‘keeper Allison. The 67-million-pound summer signing proved his worth as he pulled off an unbelievable reaction save from point-blank range after a cross fell to an unmarked Arkadiusz Milik.

Napoli and Inter enter the Europa League last-32, a consolation for finishing third in the Champions League group. The hope of Italian football in the continent’s premier competition now rests on the shoulders of Juventus and Roma, who play their final group game on Wednesday, having already secured their place in the next round.