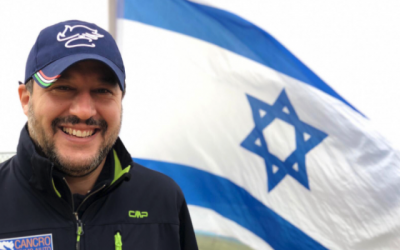 (The Times of Israel)

ROME – Interior Minister Matteo Salvini has caused "concern" and "embarrassment" from within the Italian defence ministry during a visit to Israel over his comments characterising Hezbollah as “terrorists."

At a press conference in Jerusalem, the Deputy Prime Minister was quoted as saying, “I don’t understand the uproar I’ve read about an agency that defined Hezbollah as Islamic terrorists. If you dig tunnels underground tens of metres encroaching into Israeli territory, I don’t think you’re doing it to go shopping.”

As he visited the site of Hezbollah’s “first tunnel of attack,” according to the Israeli army, Salvini also commented “whoever wants peace must support Israel’s right to existence and security” in a Twitter post. “I’ve just been at the northern border with Lebanon, where Hezbollah Islamic extremists are tunnelling and firing missiles in an attack on this country’s bastion of democracy.”

The Ministry of Defence responded to Salvini’s comments, saying “we do not want to cause any controversy, but such statements put our men in the South and the UNIFIL (United Nations Interim Force in Lebanon) mission along the blue line in evident difficulty.”

A spokesperson for the UN mission gave a telling reminder that UNIFIL “does not comment on the political positions of the governments of the 43 countries” involved in the mission.

Salvini’s Five Star Movement counterpart Luigi Di Maio emphasised his party’s commitment to remaining impartial, saying “the UNIFIL mission is one of the most important peace missions in the world and we consider M5S to be a ‘super partes’ element.”