Khashoggi among journalists named 'Person of the Year' 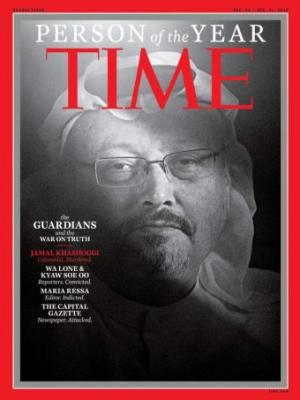 ROME - In a bid to advocate for freedom of the press, Time magazine has awarded the accolade of the 2018 ‘Person of the Year’ to a group of killed and imprisoned journalists. Washington Post columnist Jamal Khashoggi, brutally murdered inside Istanbul’s Saudi Arabia consulate in October, was included in the group of so-called “Guardians” of truth.

Time magazine editor Edward Felsenthal raised the fact it was the first time someone deceased had been chosen as Time magazine’s Person of the Year. “It is very rare that a person’s influence grows so immensely in death,” he commented. “His murder has prompted a global reassessment of the Saudi crown prince, and a really long overdue look at the devastating Yemen war.”

The staff of the Capital Gazette newspaper in Maryland were also honoured. Five employees were shot at The Capital offices in June after a gunman opened fire. On the day of the incident, Gazette reporter Chase Cook tweeted, “I can tell you this. We are putting out a damn paper tomorrow.”

Two Reuters journalists, Wa Lone and Kyaw Soe Oo, were included in the group too. They had been imprisoned in Myanmar for almost a year. Maria Ressa, Chief Executive of the Rappler online news website, also received a mention. She exposed countless extrajudicial killings that took place during Duterte’s war on drugs in the Philippines, and was just recently charged with tax evasion and failure to file tax returns in what has been described as a “thinly-veiled attempt by Duterte to silence critics.”

According to the magazine, the individuals chosen have exposed, “manipulation and the abuse of truth.”