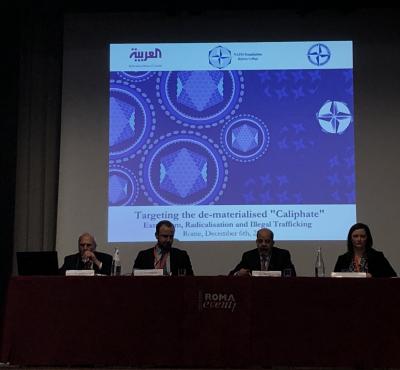 ROME - In light of recent reports indicating an increase in terrorist attacks on European soil, discussions about how to combat extremism and radicalisation could not be more timely. The NATO Defence College Foundation’s high-level conference ‘Targeting the De-Materialised “Caliphate” – Extremism, radicalisation and illegal trafficking’ provided a framework for this dialogue. From world-renowned researchers to esteemed global strategy directors, a great many individuals with expertise on the matter were invited to speak at the event, which opened Thursday.

The aim of the conference was to discuss strategies for keeping the terrorist scene fragmented and off-balance, by combining both counterterrorism and Countering Violent Extremism activities.

Although Islamic State has lost almost 98 percent of the territory it once controlled, the group is ripe for a comeback in Sunni-majority areas of Iraq and Syria. It is noteworthy that the militant group has amassed billions of dollars through extortion, taxation and the sale of pilfered oil. Their abilities should not be underestimated. Multinational coalitions and international organisations, such as NATO and the EU, must therefore focus on restricting jihadi propaganda and recruitment.

In his opening speech, President of NATO Defense College Foundation in Rome Alessandro Minuto-Rizzo addressed the importance of stifling future terrorist recruitment. Due to the fact that “we are witnessing an unprecedented diffusion of power,” he emphasised the need for a new disciplinary approach to achieve this.

He also spoke more generally about the importance of suppressing the group’s activities. “We are seeing new forms of crime,” he said, referring to the outbreak of new activities such as kidnapping for ransom theft, drug smuggling and other types of illegal trafficking.“This means that clever analysis and research is needed.”

Colonel Ian Hope, who serves on the faculty at the NATO Defense College in Rome, was the next to speak. He noted that, though we have been dismantling the physical caliphate for some time, this has only led to the dispersion of ISIS fighters. There are still many disenfranchised youths all over the world, meaning that we must now focus on targeting, neutralising and eliminating radicalisation. He suggested we employ long-term strategies, such as education, to achieve this.

Ahmet O. Evin, Professor Emeritus at Sabanci University, called extremism and radicalisation “immediate threats, that have heightened our feeling of vulnerability.” He added harrowingly that ISIS, a network sustained by money, has “penetrated into the heart of Western Europe,” and alongside his description of terrorism as “the most destructive form of violence”, emphasised the importance of the conference as a platform to discuss counterterrorism strategies.

During the first session, distinguished panel members discussed strategies against the evolving armed radicalism. Questions were raised about what counterterrorism can achieve, and how governments and NATO can better corporate. Managing Director of the Institut National d’Études de Stratégie Globale in Algiers and the Programme Management Officer of the UN Counterterrorism Office in New York were among the speakers.

Speakers discussed how to improve anti-trafficking instruments in the second session, as well as how to make the fight against grey money transfers more effective. Former Ambassador to NATO and the EU Mahmoud Karem, and the director of the Terrorism, Transnational Crime and Corruption Center (TraCCC) Louise Shelley were among those invited to share their views.

Discussions during the final session were aimed at how to integrate tools that counter violent extremism. The efficacy of referral and de-radicalisation programs were analysed, tools which can be employed in a cost-effective way. Former Secretary General of the Union for the Mediterranean Ahmad Masa’deh was among the speakers.

Hundreds of people attended the conference, which took place at the Centro Congressi Roma Eventi and will continue tomorrow. Its importance cannot be underestimated, since all political problems which engender radicalisation, from exclusion and disenfranchisement to sectarianism and oppressive government centralisation, require political solutions. It is critical that such solutions are discussed by international organisations such as NATO.