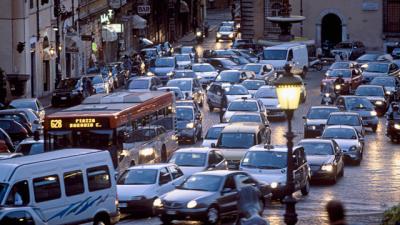 Photo credit: ABC News. The streets of Rome, which have seen high levels of traffic volume in recent years.

ROME - An amendment establishing a bonus-malus system on car registration, that is dependent on CO2 emissions, has been approved by the Italian Budget Committee. It is reportedly a major cause for concern for car manufacturers and dealers alike.

According to industry experts, the car market will risk losing momentum upon the amendment's implementation, as the prices of vehicles will undoubtedly increase.

Some models of the Fiat Panda, the most sold vehicle in Italy, and the Fiesta will cost an additional 400 euros, and the average price for the majority of vehicles will increase by over 300 euros. An increased sales potential can only be guaranteed for Italy’s 150 thousand electric and hybrid cars, which form just 8.5 percent of the market. The taxes however will hit around 1.35 million buyers.

“We view this proposal extremely negatively,” says Michele Crisci, the president of UNRAE (the Association of foreign car makers operating in Italy). “It is negative because, on the one hand, the acquisition of new vehicles which emit higher amounts of CO2 will be hit hard.”

“On the other hand, a sector which is already making large sums of money will continue to be rewarded."

Adolfo De Stefani Cosentino, the president of Federauto, the Federation of Car Dealerships, also reacted negatively to the amendment: “the proposal that has been presented will worsen the situation, whether we're talking with regards to environmental problems, the state’s revenue, the impact on the market or employment rates; today over 120,000 people are employed in automobile companies.”