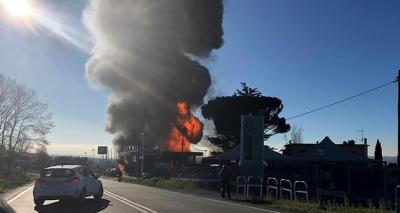 ROME - An enormous explosion at a petrol station in Rieti has killed two people and injured 17. According to reports, a fuel tanker containing vast amounts of flammable liquid was offloading fuel when it caught fire. Witnesses claimed the explosion, which occurred less than half an hour after the initial blaze began, was akin to an earthquake.

One of the victims was a 50-year-old firefighter. Despite not being on duty at the time, he stopped to help his colleagues after passing by the blazing vehicle. The Italian fire service tweeted that his death had filled them with “endless pain.”

The other victim was hit by the blast after stopping nearby to observe the situation.

According to reports, emergency services in the Lazio region mobilised themselves to help “an unlimited number of casualties.” Several ambulances and three helicopters arrived at the petrol station, located at the 39th kilometre on Via Salaria, just a stone’s throw from Borgo Quinzio.

The injured were transported to nearby hospitals. Davide Basilicata, mayor of the nearby Fara Sabina, announced, “a red zone has been drawn up around the area which has been sealed off for the time being.”

The area will reportedly be cordoned off for some time, as firefighters, Police and the Red Cross will work together to assess the damage. An investigation has been launched into the causes of the incident.

In response to the explosion, Di Maio offered his condolences to the relatives of the victims: “Thoughts and prayers to the families of the victims in Rieti and to the 17 injured.”

Salvini wrote, "As a minister I'll do everything I can to protect those who work for the safety of Italians, improving their working conditions and hiring more people."