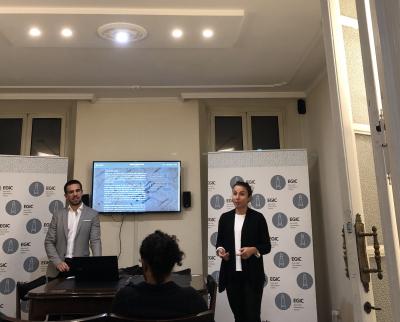 Photo of Antonino Occhiuto and Sara Manisera at the EGIC event

ROME - To mark the 15 year anniversary of America's Iraq invasion, a project illustrating the crippling impact the conflict has produced on women's lives has been launched by journalist Sara Manisera. Entitled ‘Donne fuori dal buio’, it consists of four powerful documentary videos that relay the struggles encountered by four different women in the war-torn country. EGIC held a screening of the documentaries and a discussion with Sara Manisera on Tuesday, followed by a short question-and-answer session.

Antonino Occhiuto, Research Analyst at EGIC, opened the event by summarising the key stages of the war.  He explained the importance of Iraq, and the reasoning behind the American invasion of the country in 2003.

Sara Manisera, the project’s mastermind, was the next to take to the stage. Her past work has focussed primarily on women and conflicts in the Middle East. She has written articles for many Italian and international newspapers about a range of issues, from Tunisian mothers’ struggles to find their children, to the Mosul and Raqqa offensive.

Before showing the documentaries, Manisera explained why she chose to produce the project in its current form. She felt it was important to tell the stories of four different women, because each individual’s experience of the war is unique. "There is no black and white experience of the Iraq war," she delcared. "It is critical Western society knows that each community and religious group was treated differently during the war." She also indicated the project's timeline, which details the significant stages of the conflict.

The first documentary to be shown focussed on a woman called Amena, a resident of the city of Qaraqosh in northern Iraq. She and her husband lived together for a brief period before being separated by war. She blames Saddam Hussein for her husband’s death, and related in tear-jerking detail the moment she was informed of his murder by her mother-in-law. "I blame Hussein for everything," she remarked. Amena's resilience was brought to the fore in the video. She insisted she will never leave Iraq, a country rich in natural resources. Despite the destruction caused by both Saddam Hussein and ISIS, she claimed she could never be forced to leave the country.

The second documentary related the story of Hero, a woman living in a town located between Iran and Iraq called Halabja. She works for a community-based association that provides women with important skills and information, and thus enables their contribution to society. The community was bombed by Hussein on March 16, 1988, and is therefore in need of reconstruction. Given her understanding of how it feels to be a refugee, she has dedicated herself to the smooth integration of refugees into society. "I don't want anyone else to feel how I felt," she stated emotionally.

The third documentary focussed on Rajaa, a woman from Baghdad who has “experienced great suffering.” She speaks about the importance of teaching girls to be courageous and versatile. Since women shall always be subjugated in society, she highlights the importance of never showing weakness in the face of the enemy.

The fourth documentary relays Zaynab’s story, a woman from Mosul who helps people dealing with mental troubles that were triggered by the war. She has committed herself to the city’s social reconstruction, following the battle which took place there and killed almost 10,000 civilians. "It is important to rebuild society," she stated.

After showing the four documentaries, Manisera stressed the importance of harnessing social networks to inform people about the day-to-day struggles faced by civilians in war-ridden countries.

The event was a useful platform for Manisera’s project, which is powerful not only for its portrayal of the immense destruction caused by the conflict, but also for its uplifting depiction of humanity. Despite having to deal with profound personal struggles, the women relentlessly support those around them, driven by the hope that their communities may one day return to a peaceful state.