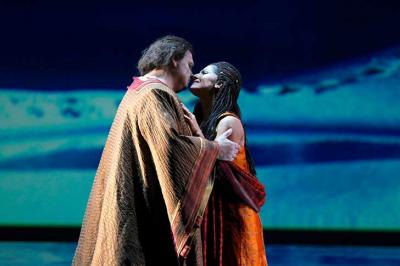 ROME - The opening peformance of Teatro Carlo Felice’s winter season was nothing short of spectacular, as 15 asylum seekers took to the stage to perform Giuseppe Verdi’s acclaimed opera, Aida. Directed by Alfonso Antoniozzi, the production fused the cultures of traditional Italian opera and modern cinema to magnificent effect. Applause rang out as performers took their bows in front of the sold-out Genovese audience.

“For Aida, we paid much attention to the casting of the Ethiopian warriors, and since our lists did not feature individuals with the appropriate characteristics, we decided to hold an audition and inform the city’s welcome centres about it,” the theatre’s superintendent Maurizio Roi explained to Il Fatto Quotidianno. “The response was extraordinary, out of the 100 people who auditioned, 15 were chosen, and they have since been enriched on a human and professional level.”

“Just one of the consequences of Italy’s security decree,” says a representative of il Ce.Sto, a social cooperative in Genoa, “is that initiatives promoting collaboration and inclusion such as these will no longer be possible.”

“Welcome centre guests awaiting refugee status will be unable to carry out work or internships. They risk month-long confinement in large structures, unable to interact with our society.”

The League’s regional minister Franco Senarega recently said that “15 Italians painted in black” could have easily taken on the roles played by the African warriors.

To his ignorance, Senarega was in fact alluding to ‘blackface,’ a form of theatrical make-up used by non-black performers over 50 years ago to represent a caricature of a black person. It is no longer in use due to the racially insensitive representation of blackness that it promotes.