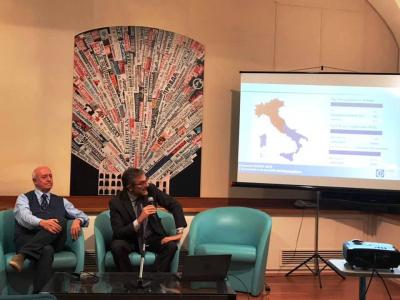 ROME - Absolute poverty in 2017 is almost as high in the South of Italy as it is in Romania, the European country that holds this sad record. This was stated by the director of SVIMEZ (Associazione per lo sviluppo dell'industria nel Mezzogiorno) Luca Bianchi, speaking at the Foreign Press Association in Italy in a meeting with foreign media correspondents.

In the South, the level is now at 12%, compared to 12.1% in the former Communist country, with one key difference: in Romania in 2008, it was around 11%, in the South ten years ago, it was 10%. Hence the worrying acceleration from the recessionary crisis to the current phase of recovery.

"In the South," said Bianchi, "there is a clear split between economic dynamics that, although slowing, has started to move again after the crisis, and social dynamics that tends to exclude a growing share of citizens from the labor market, expanding the pockets of poverty and hardship to new sections of the population." According to Bianchi, the "growth" of the poor workers "phenomenon is particularly worrying, due to the increase in low-paid jobs, due to the overall de-skilling of occupations and the explosion of involuntary part-time."

The absolute poverty level climbed above five million in Italy in 2017, of which almost 2.4 million was in the South alone. Families in absolute poverty have grown in the South from 700 thousand in 2016 to 845 thousand in 2017. In the southern area more than a quarter of families, couples and single-parents, with adult children, are placed in the lowest income bracket, to reach even about half of the population if we talk about families with minor children. The incidence of absolute poverty increases in the Mezzogiorno, especially due to the worsening in large metropolitan areas (from 5.8 percent to 10.1 percent in 2017), in which housing costs are heavily impacted, representing the most significant exit item in the families’ budget, especially affecting the most vulnerable: young people, the unemployed, low-wage workers, immigrants, single parents, people with physical and intellectual disabilities, the elderly.

Moreover, in the southern regions, the incidence of relative poverty is more than triple compared to the rest of the country (28.2 percent compared to 8.9 percent in the Center-North), following the low rate of employment and per capita income of approximately 56 percent of that of the Center-North.

In the meeting with the correspondents, the first of its kind since long time, the director Bianchi responded, in a tight sequence of questions, to the most contingent problems: from the emigration qualified by the South, to the rate of use of European funds, to impact of the economic maneuver on the prospects of the area, and, in general, on the most topical issues involving a third of the country.

A non-profit think tank created in 1946 to promote the industrialization and economic development of southern Italy, Italy's poorest area, SVIMEZ prepares annual reports and research on the economic conditions in Southern Italy.