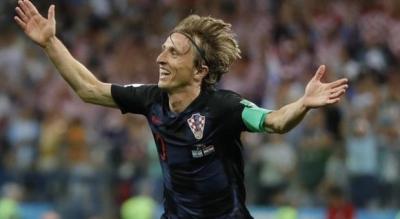 ROME – Luka Modric has been crowned 2018 Ballon d'Or winner as Juventus striker and five-time winner Cristiano Ronaldo had to settle for second behind his former Real Madrid teammate.

Modric won a third successive Champions League title alongside Juve’s record signing in May, before captaining his country to a World Cup final in Russia in the summer, where Croatia lost out to France in a six-goal thriller. The midfielder’s performances at the tournament won him the Golden Ball, the award for the best player at the World Cup.

Prior to Modric’s success in 2018, the end-of-year award had been dominated by Ronaldo and Barcelona’s Lionel Messi. Former AC Milan striker Kaka won the sport’s top prize in 2007, before Messi and Ronaldo shared top spot for the next 10 years.

Speaking after the ceremony, Modric dedicated his award to players who missed out on success during the Ronaldo-Messi era of dominance. “Maybe in the past there are some players who could have won the Ballon d’Or like Xavi, Andres Iniesta or [Wesley] Sneijder but people finally now are looking at someone else,” the midfield maestro said.

Ada Hegerberg, striker for Lyon and Norway, won the inaugural Women’s Ballon d’Or, while Mbappe was awarded the Kopa Trophy for the best uder-21 player alongside his fourth place in the main competition.