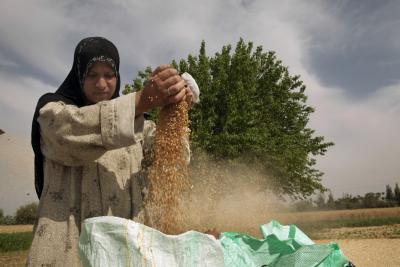 Agriculture is a key sector of Egypt’s economy, providing livelihoods for 55 per cent of the population and directly employing 30 per cent of the labour force. Farming is also a vital source of exports and foreign exchange. IFAD is supporting Egypt’s Government in achieving its national plans – IFAD interventions have already covered some 65 per cent of reclaimed lands and will reach 87 per cent in the future.

“IFAD prides itself on being among the first donors to be involved in tackling the challenges that smallholder settlers face in the reclaimed lands in Egypt,” said Brown. “IFAD reaches out to unemployed youth in rural areas, providing access to affordable finance as well as technical assistance for on or off-farm income-generating activities.”

Among major challenges facing Egypt are youth unemployment, climate change and low productivity in rural areas. Young people make up 60 per cent of the country’s population, but 47 per cent of them are unemployed. Fifty-five per cent of beneficiaries of IFAD-supported projects in Egypt are young farmers.

“Egypt is IFAD’s largest recipient of financial assistance in the Near East and North Africa, and was one of the first member countries to receive IFAD financing,” said Khalida Bouzar, IFAD’s Regional Director for the Near East, North Africa and Europe.  “Over nearly four decades of continuous cooperation, our successful strategic partnership has been able to contribute towards poverty reduction and improved food security--Cairo has been chosen to be an IFAD sub-regional hub covering nine countries across the region, demonstrating the importance of the IFAD-Egypt partnership.”

In addition to high-level meetings, Brown visited two IFAD-supported projects and met project participants to see first-hand how the project has helped them improve their lives. The Promotion of Rural Incomes through Market Enhancement Project covers seven governorates and is benefitting 50,000 rural households by integrating them into agricultural value chains. The On-farm Irrigation Development Project in Old lands supports efficient use of water resources, which are threatened by climate change, population growth, industrialization, increasing pollution and poor water management. Project investments are generating seasonal and part-time work for more than 21,000 poor rural men and women.