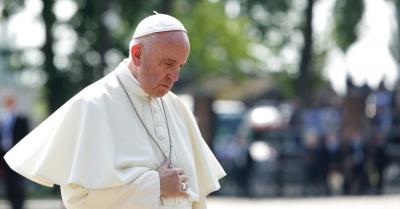 ROME - Pope Francis has harshly condemned Black Friday for inducing rampant consumerism. In his homily for Monday’s mass in Santa Marta Church, the pontiff described consumerism as, “the enemy of generosity, that causes people to spend more than they need to.”

According to experts at Politecnico di Milano, Italy’s largest technical university, a turnover of one billion euros was generated in Italy on Friday Nov. 23. This marks an increase of 35 percent on Black Friday revenue figures recorded in 2017.

“You walk, for example, around your room, or look into your wardrobe. How many pairs of shoes do you own? One, two, three, four, 15, 20…it’s a little too much…I once knew a Monsignor who owned 40 pairs,” said the pope. He added, “but if you own lots of shoes, give half of them away. How many clothes do I not wear, or do I only wear once a year? It is a way of being generous, of giving away what we have, of sharing.”

The pontiff spoke about generosity, a virtue which is slowly being superseded by narcissistic interests. “Generosity, on the contrary, expands our hearts and leads to magnanimity.”

Francis went on to speak about a fundamental difference between rich and poor people in society, citing the parable of the ‘Rich man and Lazarus’ (il ricco Epulone e Lazzaro). “The contrast is so great that it enables the Lord to declare that a wealthy man will find it difficult to enter into the Kingdom of Heaven. One could describe Christ as a Communist,” revealed the pontiff, adding, “the Lord...knows that behind wealth, there is always an evil spirit.”

“No one can serve two masters. You cannot serve both God and money," he declared.

The pope has frequently urged people to suppress the temptation of buying more than they need. He has described consumerism as an illness that is slowly infecting the world, and in his speech recalled a “tourist-shopping” program he heard about in Buenos Aires. “People would board planes on Friday evening, and embark on a ten-hour flight to a different country, where they would visit supermarkets on Saturday, and part of Sunday.”

He emphasised the necessity to maintain distance from consumerism, which he has described as “a lack of austerity in life.”

Francis has long been renowned for his modest tastes. Upon his election in 2013, he refused to move into the lavish apartment in the Apostolic Palace where his predecessor lived, choosing instead to reside in more modest lodgings.