Poignant weekend for Serie A in light of Genoa disaster 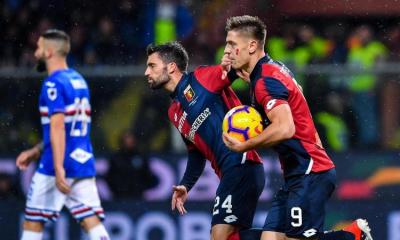 ROME – Players throughout the Serie A sported red marks on their face in a condemnation of violence against women in their weekend fixtures, while Genoa and Sampdoria, both based in the same city, met for the first time since the Genoa bridge collapse.

In contrast to Genoa’s fixture against Empoli – the first home fixture for either Genoa-based team since the Aug. 14th disaster –, which featured a minute’s silence, black armbands and no joint team photo, Sunday’s game was preceded by a montage video appealing to both sets of fans to take pride in their city. It was perhaps fitting that the game itself, still fiercely competitive, ended in a draw, each side finding the target once. League top-scorer Krzysztof Piatek increased his tally to 10 from the penalty spot to equalise quickly for Genoa after Sampdoria had taken an early lead courtesy of a Fabio Quagliarella header.

Interior Minister Matteo Salvini and AC Milan manager Gennaro Gattuso shared some choice words in the media after Milan’s draw against Lazio on Sunday evening. A last-gasp equaliser from Lazio at the Olympic Stadium was met with comments from Salvini, a lifelong Milan fan, that he “would have made changes.” “I don’t talk about politics because I don’t know anything about it,” Gattuso fired back. “He should focus on all the problems we’ve got in this country, if the Deputy Prime Minister is talking about football, we’ve gone wrong,” the manager added. Milan took the lead in the fixture through a lucky own-goal, with both teams having enjoyed a host of chances, only to be denied by some excellent saves at both ends. However, a long ball forward in the last minute of added time was smartly finished by Joaquin Correra to earn Lazio a point.

At the top of the table, Cristiano Ronaldo scored his 10th goal in all competitions for Juventus as the Old Lady extended her lead in the Serie A. Goals either side of half-time from Ronaldo and Mario Mandzukic sealed the three points for Juve against SPAL. The Portuguese striker latched onto a dangerous free-kick in the 29th minute and slotted the ball home and could have had a second in a similar fashion early in the second-half but didn’t react quickly enough after a Douglas Costa strike bounced back off the post. Instead, Mandzukic doubled Juve’s lead by tapping in a simple rebound after two thirds of the game, sealing a comfortable victory.

Second-placed Napoli could only manage a point against bottom-of-the-table Chievo in a hugely frustrating afternoon for the azzurri. Despite having 70 percent possession and taking 21 shots, there was no way through in what should have been an easy victory. Chievo, however, defended resolutely and earned a vital point in what is already a mammoth challenge to retain their place in Italy’s premier division for next season. Hot on the azzurri’s heels, Inter Milan drew within just one point of second with an assured performance at home to Frosinone. A brace from Keita Balde Diao came either side of Lautaro Martinez’s 57th minute header to complete a comfortable 3-0 score-line.

AS Roma’s crisis showed no sign of abating after a fourth loss of the season, suffering a painful 1-0 defeat to Udinese away, despite having over three-quarters of the ball and a staggering 26 shots. Rodrigo De Paul’s superb finish against the run of play just after half-time, combined with a series of excellent saves from Juan Musso in goal, gave Udinese a precious victory, lifting them to 16th in the table.

Elsewhere, Bologna and Fiorentina played out a 0-0 draw, while Empoli lifted themselves out of the relegation zone with an entertaining 3-2 win against 10-man Atalanta. Two goals in the last 15 minutes completed a brilliant turn-around for Empoli, who were trailing by two goals after 40 minutes. Parma also leapfrogged opponents Sassuolo, Atalanta and Roma into 6th place with a narrow 2-1 win.