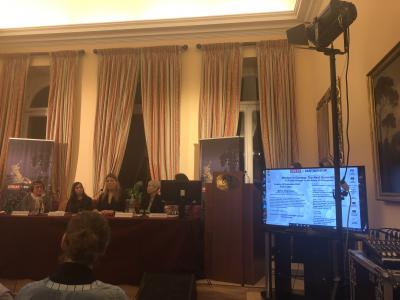 ROME - “It isn’t just women who can understand women. Men can understand women too, but they choose not to.” Tolaini-Sage’s statement was just one explanation given at Tuesday’s ‘Women In Gaming’ event for the industry’s lack of female diversity. British Ambassador Jill Morris opened the conference, revealing that less than 19 percent of employees in the British gaming industry are female. An insightful discussion ensued, which saw industry professionals and university professors alike question the under-representation of women in the world’s largest entertainment industry.

Marie Claire Isaaman, CEO of Women in Games, suggested the problem lies in the lack of encouragement given to women to find jobs in the gaming sector. Moreover, little research has been conducted into the gender composition of video game production teams, therefore the issue has not been brought to people’s attention.

According to many speakers, poor education is the root cause of the issue. Angela Paoletti, founder of Local Transit, indicated women have been raised to believe that gaming is a “male industry.” This was reinforced by Sharon Tolaini-Sage, a professor at Norwich University of the Arts, who declared, “if you mentor people the right way, you can change culture on the inside.”

In the same vein, founder of Geogrify LLC Kate Edwards suggested women have been indoctrinated to believe games create violence, and that gaming is therefore “the wrong” sector to work in. She added that gender diversity in video production teams has proved to foster a thriving working culture, and provide a better return on investment.

The second session of the conference centred upon the future of the industry. Ivan Venturi of IV Productions opened proceedings, emphasising that sexual diversity in the industry should be promoted to the same degree as gender diversity.

While Ruth Falconer, a Professor at Abertay University, suggested that the gaming industry is increasingly aligning itself with politics, given that policymakers have been employing gamification in recent years, Elisa Di Lorenzo, one of the heads of studio at Untold Games, declared that important industry players have been increasingly “playing it safe.” She indicated this may explain the lack of female representation in the sector.

Sean Taylor, the recently appointed director of InGAME, brought the discussion to a close, emphasising that he would use his role to give others opportunities. In light of the fact that 48 percent of video game players in the UK are reportedly female, it seems that the problem does not lie in women’s limited interest in the industry, but more in a lack of opportunity.

The “Women in Gaming: The Next Generation” conference was organised as part of a series of initiatives questioning the gender composition of male dominated sectors. The project was launched by the British Ambassador under the tagline of “Women In”. She has declared that, as the first British Ambassador to Italy and San Marino, the under-representation of women in industry is an issue of great importance to her. Giulia Rossi from ‘Women and Technologies’ also took to the floor to stress that the problem must be resolved. “I hope that Italy and the UK will work together in the future to close the gender and competence gap,” she announced.