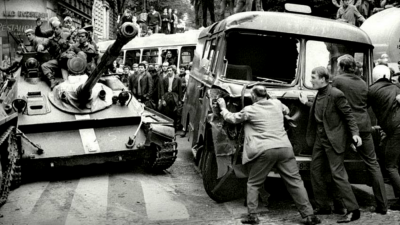 ROME - ... The United Kingdom readied itself to redeploy out of the Arab Gulf, the USSR and US were still snuggled in detente, Iran had a Shah while the Rolling Stones’‘Sympathy for the Devil,’ sat atop the charts. Then, as now, the call for democracy echoed. On Czechoslovak streets — from Prague to Bratislava and everything in between — the 1968 call for elections, for democracy, for tolerance was met by Soviet tanks, arrests, violence. The Prague Spring was not aborted, it was stifled. Since those bloody days, Czechs, Slovaks and all the others behind the Iron Curtain worked hard to shed their communist dictatorship pasts and then march forward, albeit with the occasional teeter, to build democratic states anchored in the political, social, economic and military folds of Europe and the wider West.

Many have sought to liken the Prague Spring to the so-called Arab Spring, but the comparison is hollow. There are no real points of convergence with the exception of the use of the term democracy—but not democracy itself. For the Czechs and Slovaks that sought change and resisted Soviet occupation, democracy had a very different meaning then for those that took up arms in Yemen or waded into the sectarianism and tribalism of wider the Middle East. In some places, the word democracy has become an aphrodisiac and it is used so wildly so as to eclipse other political motives and justify violence.

Think about Bahrain. Iran-backed militias — like Hezbollah and Saraya al Ashtar — use the term democracy to justify arming Bahraini citizens to attack other Bahraini citizens. And despite the fact that such groups want to recreate Iran’s Islamic Republic in Bahrain, to overthrow the country’s leadership and replace it with a theocracy in Khomeini’s image, many in Europe and the wider international community are quick to criticise Bahrain’s government for taking actions to curtail violence and protect its citizens. It seems that the Rolling Stones did more than sing, they predicted! The case of Bahrain shows that too many have sympathy for the devil as long as the devil justifies his actions in the language of democracy.

As Bahrain prepares to head to the polls in its 5th consecutive parliamentary elections it is essential to underline the fact that these are free and fair. The candidates come from across the political spectrum: women and men, Shia and Sunni, Christian and Jewish, socialist and pro-business. This is an election to celebrate and while Bahrain has its political problems — all states do — it is really time to let it make its own adjustments to reflect the interests of its people. With so many wars raging on in the Middle East, Bahrain’s impending battling for parliamentary seats is a sign of real, not rhetorical, democracy—and no-one will die in the process.

Mitchell Belfer is the president of the Euro Gulf Information Centre