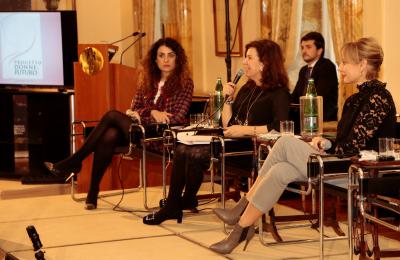 ROME - The conference ‘Women In Tech’, held at Villa Wolkonsky in partnership with the ‘Progetto Donne e Futuro’, focused on stimulating female attendees to pursue a career in technology. Dynamic sound bites bounced back and forth, encouraging women not to be disheartened by statistics underlining male domination in the industry. "When you are competent, you are unbeatable," the Head of Cabinet of the European Space Agency (E.S.A.) declared, while the Founder of HewardMills Ltd announced, "if you think you're too small to make a difference, you haven't spent a night with a mosquito." British Ambassador Jill Morris and The Honourable Cristina Rossello coordinated the event, and women hailed for their contributions to the world of technology made poignant speeches on the matter.

Cristina Rossello, President of the ‘Progetto Donne e Futuro’, opened the session. She identified the need for society to promote female role models, and emphasised that young women should be offered opportunities, such as scholarships and mentor programmes, that accelerate their transition into the working world.

Ambassador Jill Morris was the next to speak. She cited statistics illustrating the lack of gender diversity in the technological world, adding substance to Rossello's argument. “Only 17 percent of people currently working in the tech industry in the UK are women,” she declared, “and only seven percent of students taking computer science at A Level are women.” She remarked that, as the first British Ambassador to Italy and San Marino, the under-representation of women in different industries is an issue of great importance to her. The conference is just the latest in a cycle of events that she has hosted under the tagline of “Women In”. Each initiative focuses on promoting women in sectors perceived as male dominated.

Many successful women then took to the floor to shed light upon the issue. Farzana Dudhwala, who was representing Dame Sue Owen, a member of the Government Office for Artificial Intelligence, discussed the role emerging technologies play in breaking down problems of diversity. “A more diverse civil service will lead to a better civil service,” she declared.

The Head of Cabinet of the E.S.A., Elena Grifoni Winters, spoke about incidents of female subjugation she has witnessed during her lifetime. She said that the issue of female underrepresentation can only be tackled if women don’t lose faith, and refuse to be “limited” by their gender.

This was reinforced by Dyann Heward Mills, Founder of HewardMills Ltd, who added that her company is "proof that diverse companies achieve success.” She spoke about gender equality in cyber security, and underlined that society has “a huge opportunity to harness the pool of talent that is currently untapped.” Another speaker, Financial Times correspondent and producer Hannah Roberts, illustrated how she has utilised this opportunity. She launched ‘Code Your Future’ in 2016, an initiative that teaches coding to refugees. It has seen high success rates: “within six months of finishing the course, 50 percent of students find employment." She mentioned that the team behind the initiative are searching for sponsors to help students finish the course, as it costs around 500 euros to complete per student.

Opening with Gandhi’s famous words, “be the change you wish to see in the world,” the afternoon session shed light upon different activities carried out by the project, which has supported women of all skin colours and religions. It aims to “promote natural, female talent,” in a generation that does not offer equal opportunity to all.

Other speakers came to the floor to express their views. Gianna Martinengo, founder of the project “Women & Technologies” launched in 1999, emphasised that women and technology can work together, contrary to popular belief. Marika Lion presented a digital archive project dedicated to gastronomy, alongside her younger partner Grazia Salvemini.

The event was extremely insightful and thought-provoking, and a powerful platform for Rossello’s “Progetto Donne e Futuro.” The British Ambassador said, “I am very proud to be part of the project. We have all seen how it is based on three important morals: inclusion, generosity and kindness.”