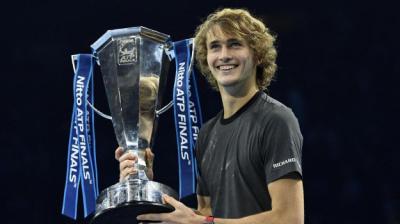 ROME – Alexander Zverev produced a stunning performance against  world number one Novak Djokovic to take the biggest win of his career at the season-ending ATP Finals on Sunday.

The German, tipped as “the best in the next generation” by compatriot Boris Becker after the match, outclassed the overwhelming favourite Djokovic over two sets, completing his 6-4 6-3 victory in an hour and 19 minutes with a spectacular down-the-line backhand.

Just 21 years old, Zverev has shown his capability to compete at the highest level for a number of seasons but hadn’t been able to convert his talent into consistent victories against the world’s best. His performance in London, therefore, carries huge significance, given Djokovic’s form coming into the event. Since returning to the sport after an injury break, the Serb has looked unbeatable, taking back-to-back Grand Slam titles at Wimbledon and Flushing Meadows on a run of 35 wins in 37 matches. He even saw off Zverev in rather comfortable fashion in the group stages of the Finals.

However, the world number four showed incredible mental resilience to flip the form book upside down, producing sparkling tennis at key moments in the match, as every great champion does. Serving for the first set at 5-4, having just broken Djokovic, a nerveless Zverev wheeled off three huge aces to take a crucial advantage. The German’s confidence continued into the second set as his dominant serving seemed to knock the life out of Djokovic. “He had big serves. I wasn’t returning well…my game fell apart,” the Serb admitted.

Becker, a former grand-slam winner himself, claimed that “the world saw a new superstar in tennis on Sunday” in Zverev. “To beat Novak [Djokovic] and Roger [Federer] back-to-back in one of the biggest tournaments in the world tells him, most importantly, but also the world, that he is going to be the next big thing,” Becker continued.

For all the plaudits coming his way, Zverev remained composed in his post-match interview. Comparisons to Djokovic’s game, and potential success, made by the Serb himself were met with a reality check from the German. “I hope I can do great. But just chill out a bit,” Zverev joked. “I mean, I’ve won one of those, he won five. He’s won, I don’t know, 148 titles more than me. Let’s not go there for now,” he continued.

Zverev’s attitude is that of a great champion in-the-making, wishing to do his talking on the court, rather than off it. “Obviously it is the biggest title I have ever won,” he admitted, but the German seems hungry to prove himself at grand-slam level, something he hasn’t really managed in his career thus-far. If he manages to reproduce performances as stunning as this against the best in the sport, there is no doubt that Becker’s plaudits will ring ever truer.

The world of tennis has been waiting for a new king after years of domination from the Djokovic-Nadal-Federer generation. By winning his first ATP Finals trophy, Zverev has certainly put himself first in-line for that coronation.