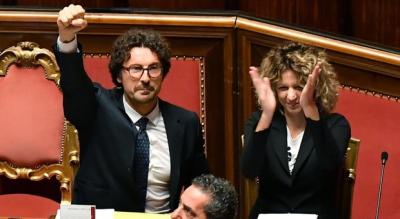 ROME - The decree of measures for the city of Genoa following their tragic bridge collapse was passed in Parliament Thursday, though it was a fist salute given by Minister Danilo Toninelli that stole onlookers’ attention. The gesture was considered inappropriate given the circumstances, and shocked journalists and politicians alike.

The Senate sitting was suspended upon the decree’s approval, given the rowdy atmosphere that ensued. President of the Senate Maria Elisabetta Alberti Casellati announced immediately, “I am being told that you gesticulated in a way that isn’t commendable for a minister. I have a duty to pick up on any gestures that aren’t commendable, that shouldn’t be articulated in the chamber, out of respect for the institutions and for the dignity of the chamber.”

The decree was presented to the chamber on Nov. 1 following a night sitting. While there were 167 votes in favour, only 49 Senators voted against and 53 abstained.

Anna Maria Bernini, leader of Forza Italia in the Senate, accused Toninelli for “giving a fist salute while voting was taking place, speaking on the telephone and chewing gum during the explanation of the vote.”

“We won’t allow him to thrust his fist in the chamber again,” she added.

Due to the “offensive behaviour of Minister Toninelli and Minister Lezzi, we must end this sitting with dignity and therefore ask for a minute of silence for those who died in Genoa,” remarked Andrea Marcucci, the Democratic Party leader in the Senate.

Toninelli has since responded to the uproar. “I am expressing sentiments of joy and exultation, because the marvellous city of Genoa will finally be able to pick itself up again. It has been brought to its knees due to an event which should have and could have been prevented. There may even be some people in this chamber who enabled the motorway companies to increase their finances as much as they did.”