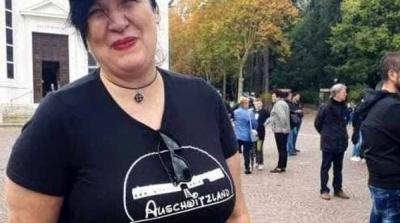 ROME - Images posted online of an Italian woman wearing a t-shirt featuring the word ‘Auschwitzland’ and the Disney logo in Predappio, Mussolini’s hometown, have sparked outrage across the country. Selene Ticchi D’Urso was attending a rally that she had helped organise, held to mark the anniversary of the ‘March on Rome’ which led to Mussolini’s National Fascist Party taking power in 1922.

The clothing choice of Ticchi D’Urso, a member of the Forza Nuova, has been described by Forlì lawyer Maria Teresa Cameli as “extremely serious.” It cannot be attributed to “carelessness or excessive liberalism,” she declared in a statement.

She has been heavily criticised, and was the subject of a complaint filed by the National Association of Italian Partisans (ANPI) a few days ago.

“A great deal of blood was lost during the Second World War, especially during the extermination of Jewish people, and it should only be treated with respect and emotion,” added the lawyer. The offence she is alleged to have committed has yet to be identified.

“I have not yet received court documents and don’t know what I will be investigated for. I may or may not be accused for committing the offences identified by ANPI,” Ticchi D’Urso said. “If I am to be accused for those offences, I will be very relaxed, because I didn’t commit them.”

ANPI did not just file a complaint against Ticchi D’Urso, but also against the rally itself, for it reportedly bore Fascist undertones. “It was an illegal re-enactment of fascism. From the uniforms to the Roman salute, it was all a celebration of Mussolini’s dictatorship which complete disregarded the barbarism it stood for,” a representative for the association announced. They have accused the rally of instigating racial hatred.

Ticchi D’Urso, who was once Forza Nuova’s mayoral candidate in the Bolognese town of Budrio, was suspended from the party the day after the rally. The far-right party, which has long been criticised for its radical positions and acts of violence, has attempted to distance itself from Ticchi D’Urso, who called her clothing choice “black humour.”

According to reports, around 2,000 people participated in the rally. Many gave the fascist salute and chanted slogans such as "Duce, Duce,” (Mussolini’s title). The fascist dictator’s tomb in Predappio is allegedly a pilgrimage site for some Forza Nuova supporters.