‘Moliwood’ face off in season-ending showdown 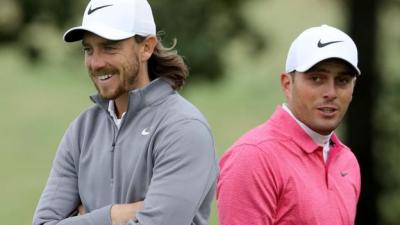 ROME – The record-breaking Ryder Cup partnership of Tommy Fleetwood and Italian Francesco Molinari left their allegiances to one side on Thursday as they began a four-day season-ender at the DP World Tour Championships to decide the winner of the Race to Dubai title, which determines the number-one ranked player on the European Tour.

Molinari currently sits top of the rankings, which have a prize money pool of five million dollars distributed among the top 10 players, and leads second-placed Fleetwood by just over a million points. The Italian, who won a record five out of five points at the Ryder Cup in Paris in September, can guarantee his position at the top of the Race to Dubai standings with a fifth-place finish at the Jumeirah Golf Estates in Dubai, even if Fleetwood wins the competition.

In an interview with Sky Sports, the understated Italian said that winning the Race to Dubai “would mean a lot because it’s a season, year race, which makes it a lot harder to win.” “You can have the best week of your life,” he continued, “and win one tournament, but to win a competition that lasts throughout the season, with the amount of talent there is on the European Tour right now, is something really hard to do.”

Fleetwood, who has to win the competition to even stand a chance of toppling Molinari and retaining his title, played down the competition between the two on the eve of the event as he commented on the two being drawn together, saying, “It’s great for us as friends, that you know you’re going out there with the sort of person that you’re closest with on the Tour, trying to win the biggest prize that we play for.” He added, “if it doesn’t work out for me, I couldn’t be happier for him for what he’s achieved this year.”

Ending the season atop the rankings would be a just reward for what has been a ground-breaking year for Molinari. An impressive victory at the BMW PGA Championships at Wentworth was followed by becoming the first Italian to ever win a golf major, as he triumphed at The Open in Carnoustie. His sparkling golf continued into the Ryder Cup, where he drove Europe to an incredible victory with maximum points in his five matches, including winning all four doubles fixtures alongside Fleetwood, a European record.