Roma back to winning ways, Higuain meltdown in Milan 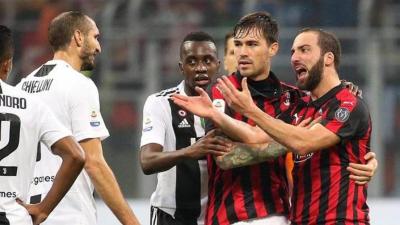 ROME – After three weeks without a win in the Serie A, AS Roma treated their fans to a consummate performance at the Stadio Olimpico, while Gonzalo Higuain missed a penalty and saw red in a disastrous display against Juventus.

A flick-on from a 19th minute corner was turned in at the back post by centre-back Juan Jesus to give Roma an early lead against Sampdoria, while Justin Kluivert almost doubled his side’s advantage just minutes later, striking the post after bursting into the penalty area from the right-wing. Roma’s second goal eventually came after 15 minutes of the second half, as Patrick Schick finished off a lovely move down the left that was instigated by Stefan El Shaaraway. The Italian winger added two goals either side of a Sampdoria consolation strike to ensure Roma came away with a 4-1 victory and, most importantly, three points, pushing them up to sixth.

In Milan, it was a night to forget for Gonzalo Higuain against his parent club Juventus. The Argentinian striker moved to AC Milan on loan in August, a transfer that will be made permanent next summer, but didn’t do anything to suggest to the Juventus hierarchy that they had made the wrong decision. On the contrary, Higuain missed a golden opportunity to bring Milan back into the game, after Mario Mandzukic had given Juve the lead inside 10 minutes. However, his penalty was well diverted onto the post by Wojciech Szczesny, one of precious few chances afforded to Milan as Juventus dominated proceedings. Cristiano Ronaldo doubled the Old Lady’s lead in the 81st minute with Juventus’ 100th goal at the San Siro, before Higuain’s frustrating evening ended in disastrous fashion. A strong challenge on Juve defender Medhi Benatia earned him a yellow card and his subsequent remonstrations were not received well by the referee, who sent the striker off in disgrace. A fitting end to a dreadful night for Higuain and Milan, as Juventus chalked up their 11th win in 12 so far this season.

Earlier in the weekend, Napoli recovered from a 1-0 half-time deficit against Genoa to keep the pressure on the league leaders. An own goal from Davide Biraschi in the last five minutes completed the comeback, giving Napoli a narrow 2-1 victory. Fellow title rivals Inter Milan, however, suffered a convincing 4-1 loss to Atalanta, interrupting their hugely impressive run of form in recent weeks. Three second-half goals from the mid-table side ensured that Mauro Icardi’s equalising penalty was ultimately in vain. Inter, tipped as potential title-challengers, have now slipped nine point behind leaders Juventus

At the other end of the table, each of the bottom three picked up points in their fixtures. Empoli took a narrow 2-1 victory against relegation rivals Udinese, the teams now just separated on goal difference. Frosinone stole a point at home to Fiorentina with an 89th minute equaliser, while Chievo finally moved out of negative figures as they played out an entertaining 2-2 draw with Bologna.

SPAL and Cagliari managed the same result in their game, though the away team scored two in three minutes to come back from a two-goal deficit. Parma edged a mid-table clash against Torino by two goals to one, while Lazio and Sassuolo shared a goal apiece in a match lacking some quality.