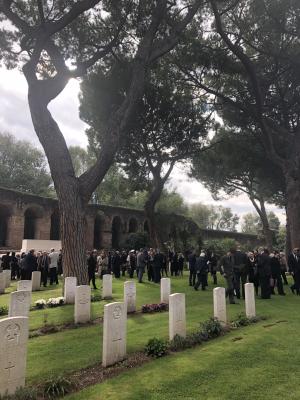 ROME - The annual Commonwealth Remembrance Day Service took place Friday at the Testaccio Commonwealth War Graves Cemetery. Diplomats, ambassadors and military personnel from nations all over the world paid their respects to the Allied war dead. This year's service was especially poignant, for it marked the 100th year anniversary of the end of the First World War.

The ceremony opened with the hymn ‘God, Our Help in Ages Past’. John McCrae’s moving World War One poem ‘In Flanders Fields’ was then read aloud by Jill Morris, the British Ambassador to Italy.

A two minute silence came immediately after, brought to a close by a hauntingly beautiful rendition of ‘The Last Post’. Sally Axworthy, the British Ambassador to the Holy See, then read a Christian prayer. Representatives of other faiths also read prayers in different languages. Towards the end of the service, wreaths were laid by representatives of many Embassies and international groups.

The ceremony was rounded off by the British Embassy Choir's moving rendition of ‘I Vow To Thee My Country’. The service was a beautiful tribute to all those who had given their lives in the armed forces.

Attendees then travelled to the residence of the British Ambassador, where a drinks reception and lunch was held. They were also invited to attend a talk at the residence, which focused primarily on Italy’s role in the First World War. Differences between the Italian and British armies were also discussed, including differences in their military tactics.

The Testaccio Commonwealth War Graves Cemetery, where the service was held, was designed by Louis de Soissons. It contains 426 Commonwealth burials of the Second World War.