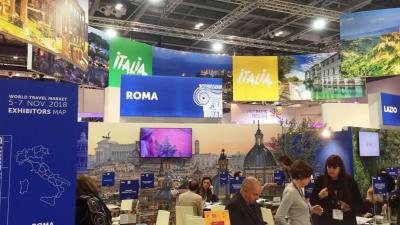 ROME - Rome has been represented at London’s World Travel Market (WTM), one of the world’s most prestigious tourism fairs, for another year running. The Capitoline tourist office took pride of place at the unmissable event, where representatives proudly exhibited the wealth of attractions on offer in the Eternal City.

Important cornerstones of the Roman culture, from art to food, were represented. Cultural events held in the city were advertised too, as well as gastronomic and shopping tours that have been sponsored by industry professionals.

“The Rome exhibited in London this year,” said Carlo Cafarotti, Councilor for Economic Development and Tourism in Rome, “is a city where everything is possible, a modern city that enchants people on a daily basis with its historical tales and cultural characteristics. We also pride ourselves on the warmth and hospitable nature of our professionals and residents, which has enabled us to draw ever closer to our goal of 15 million visitors each year. This is also a credit to the sustainable strategies we have been implementing.”

"We have shaken up old methods used in the past to attract visitors, and have come up with new ideas, such as ‘digital compasses’ for tourists,” he continues. “However in order to draw in more visitors, we need to promote these new ideas. This is why our participation at London’s WTM event is so important. There are over 51,000 people in attendance each year, and over 5,000 exhibitors from 182 countries.”

He rounded off his speech saying, “we strongly believe that our participation here will increase the turnover of Roman companies, and make us a more economically competitive city.”

The Convention Bureau of Rome and Lazio, which is Rome’s most important tourism organisation, was also in attendance. The organisation has so far scheduled 57 events to take place before 2020.