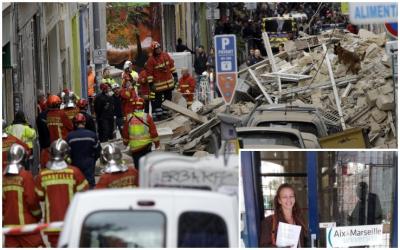 ROME - The body of 30-year old Simona Carpignano has been found beneath the rubble of one of the two buildings that collapsed in Marseille on Tuesday Nov. 6. Her friends delivered the news via a Facebook post which read, “Simona's body has been found. They've sadly seen it. The wait of the parents, the family, and friends is over.”

Simona, better known among her friends as “the smiler”, had apparently moved to Marseille six months earlier in search of a well-paid job, and to join a friend who was living there. She had graduated from the University of Salento with a degree in languages some years earlier.

She was living on the third floor of one of the buildings at the time of the collapse. When news broke of the incident, her parents had hoped she was out at the time. They received no news of their daughter’s whereabouts, nor of a discovery of her body, for the two days that followed. It was only on Wednesday when French emergency teams reported to have found her “lifeless under the rubble.”

As of Thursday morning, six people have been confirmed dead after the collapse. A further two people remain missing.

Furious residents have accused authorities of ignoring warnings about the dilapidated state of the buildings. In a news conference on Wednesday, Marseille prosecutor Xavier Tarabeux told reporters that one of the residents of the collapsed buildings had telephoned firefighters the night before the incident, saying that, “one of the cracks in her flat had widened.” She later phoned up to say that there was no need for them to come round.

Many other buildings in the street have been evacuated in the event of further collapse, as “all the buildings lean against one another.”