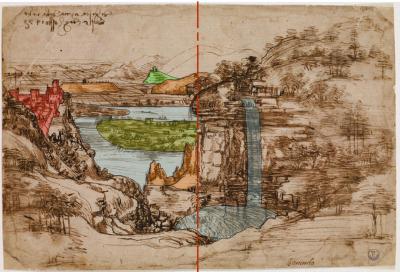 ROME - Despite claims to the contrary, esteemed art critic Cristina Acidini has suggested the location of Da Vinci’s ‘Landscape with river’ (‘Paesaggio con fiume’) has yet to be confirmed. An announcement back in 2016 that the drawing was of Marmore Falls, an Umbrian waterfall, generated a great deal of hype around the world as journalists claimed it would provide insight into Da Vinci’s youth. Yet according to Acidini, who was once President of the Accademia delle Arti del Disegno, “there is still a lot of evidence we need to gather”.

The drawing, which is currently on display in the Uffizi Gallery, bears the occasional geographical feature that suggests it is an illustration of Marmore Falls. Since the work was reportedly produced on August 5. 1473, this discovery would inform us that Da Vinci visited Umbria when he was 21 years old.

However Acidini has announced it could also be an illustration of somewhere in Montevettolini, a Tuscan village where his Grandfather once lived. After all, no evidence has been found to suggest Da Vinci ever visited Umbria, and it seems rather unlikely he did, for someone would have had to invite him and he would have needed somewhere to stay.

She has accused people for having exploited the discovery to attract tourists to the region. She has also criticised curator and art critic Luca Tomio, reported to have made the discovery, for his complacency. “I haven’t seen or heard from him for a long time,” she said, adding, “more work still needs to be done.”

Something that would perhaps explain Da Vinci’s trip to the waterfall is his interest in hydraulics. Having once declared, “water is the driving force of all nature”, he spent many years studying hydraulic solutions already attempted by previous engineers, as well as proposing new solutions. One of his major projects was an attempt to divert the Arno River to irrigate the valley around Florence. It began in 1503, only to be abandoned a short while later.

There is also evidence to suggest he observed the flow patterns of a stream near his town, Vinci, as a child.

Widely recognised as one of the greatest geniuses to have ever lived, it is perhaps no surprise that revelations about his works garner a great deal of media attention. Rome’s Museo Leonardo da Vinci in Piazza del Popolo receives thousands of tourists year upon year. The exhibition incorporates reproductions, not only of some of his most famous renaissance art in actual size, including St. John the Baptist and the Mona Lisa, but also of his anatomical sketches. It also includes life-size versions of the machines he invented, created by artisans.

A model of a multi-layered city, drawn up by Da Vinci after the plague of 1484 in an attempt to work out how to make cities healthier and less cramped, is also on display. Models of a tank and an emergency bridge feature too.

It has proved increasingly challenging for historians to find out more about Da Vinci’s life, especially by analysing his art. Indeed, fewer than 20 of his paintings survive today. This perhaps explains why critics are so determined to identify the geographical location of the mysterious ‘landscape with river’. Unfortunately, however, Acidini has hinted it is unlikely any groundbreaking discoveries will be made any time soon. “Documentary evidence is needed that we may never find,” she recently declared. 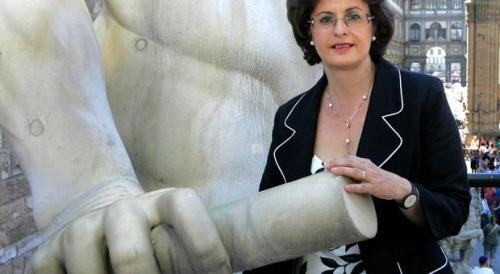