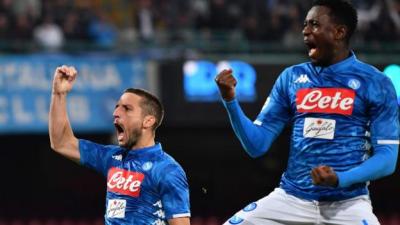 ROME – Inter Milan and Napoli recorded comfortable victories in their respective Serie A fixtures at the weekend, keeping the pressure on league leaders Juventus.

A hat-trick from Belgian forward Dries Mertens drove a dominant Napoli to a 5-1 win against a struggling Empoli side, who still sit in the relegation zone. Mertens stole the plaudits with his excellent performance, but it was Lorenzo Insigne who yet again kickstarted Napoli’s goal-fest. A counter-attack in the ninth minute ended with the Italian winger curling the ball home from just inside the penalty area. Mertens then took over, scoring three brilliant goals from outside the box as Napoli gave their opponents no realistic chance of taking anything from the game. A brief suggestion of a comeback through Francesco Caputo’s strike was quickly snuffed out by Mertens’ second of the game.

Inter Milan responded brilliantly to Napoli’s superb display, scoring five goals of their own against Genoa as they held onto second place in the league. It was a complete team performance from the Milan side with four different players adding their name to the scoresheet, while they dominated possession and conceded just two shots on target. After an indifferent start to the season, Luciano Spalleti’s side have now won their last seven Serie A fixtures, leading many pundits to suggest that they are now Juventus’ biggest title rivals.

Both Inter and Napoli still sit six points behind the Bianconeri, however, as Juve made no mistake at home against Cagliari. Paolo Dybala got them off to a perfect start, wrongfooting three defenders and firing home inside the first minute after Cagliari had given the ball away in their own half. After an equaliser from Joao Pedro, Juve quickly regained the lead as Filip Bradaric turned the ball into his own net off a fairly harmless cross. The score stayed at 2-1 for almost the entirety of the second half before Cristiano Ronaldo played in Juan Cuadrado for Juve’s third as Cagliari left themselves wide open in defence as they pushed for a late equaliser.

After a number of promising performances in the last few weeks, Roma managed to steal a point away at Fiorentina thanks to a late equaliser from Alessandro Florenzi. Eusebio di Francesco’s side were wasteful with their chances throughout the game, managing only four shots on target. The draw leaves them ninth in the table and, though still early in the season, a Champions League qualification spot is looking all-the-more unlikely.

AC Milan’s dramatic last-gasp winner ensured they kept pace with Lazio, who comfortably despatched SPAL 4-1. Centre-back Alessio Romagnoli found himself in the penalty area in the 97th minute as Milan and Udinese both searched for a late winner. The Italian defender finished with the calmness of a striker to give his side a hugely valuable three points.

Yet another defeat for Chievo left them rooted to the bottom of the table, while Frosinone missed a golden opportunity for a rare three points, after opponents Parma had to play the final third of the game with just ten men. Torino continued their impressive start to the season with a 4-1 win away at Sampdoria that saw them overtake Fiorentina and Roma in the table. Meanwhile, Atalanta moved into the top ten with a 2-1 win against Bologna.